Asura padded through the quiet, darkened jungle, illuminated only by slashes of moonlight from the canopy above. Every few steps the enormous beast would halt and sniff the warm air. Further away amongst the towering trees were the usual cries and chittering sounds of the jungle at night, but wherever the hulking dragon moved there was a hush, as if the jungle itself was holding its breath. 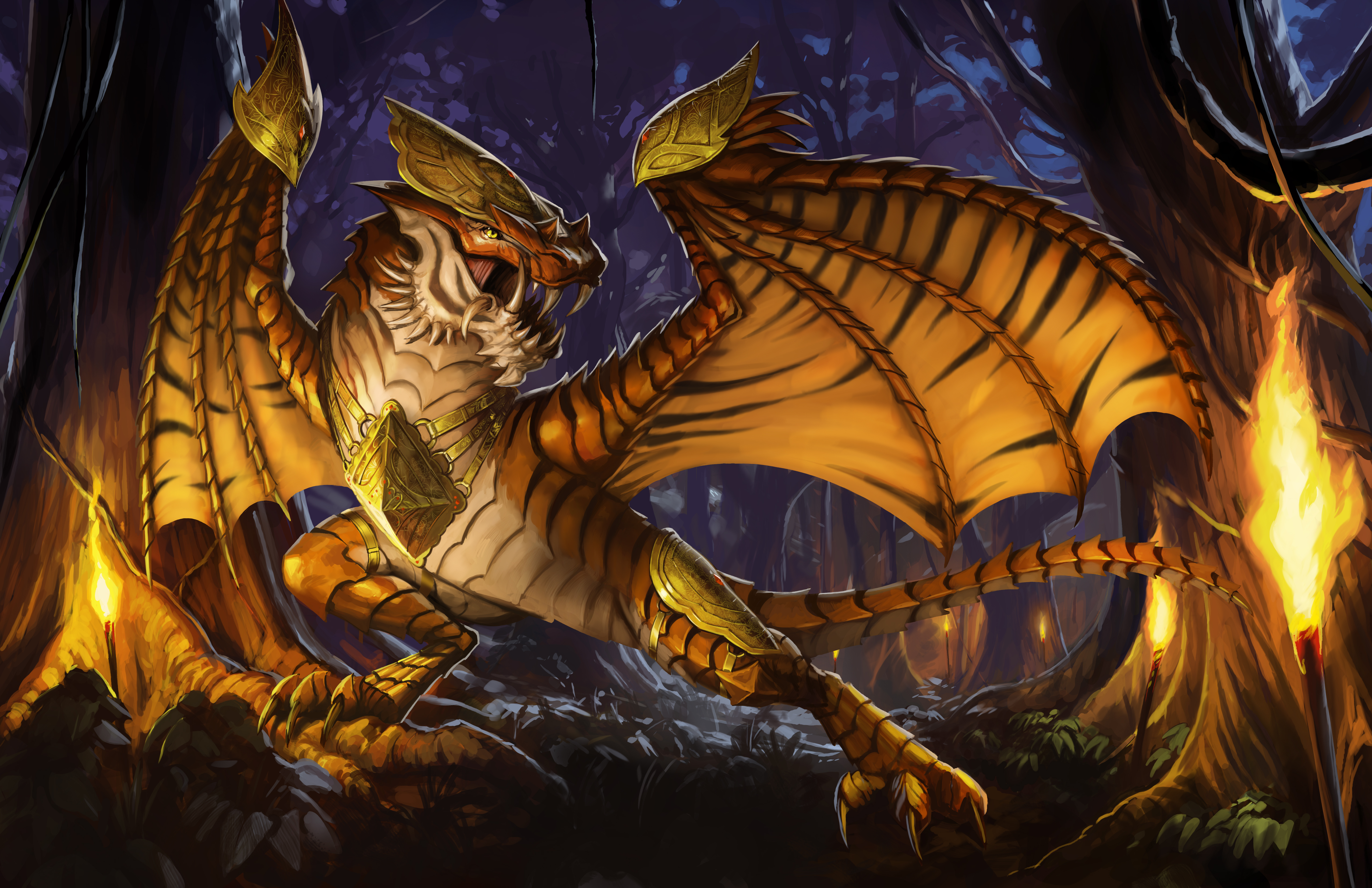 It paused again, one taloned foot lifted mid-step, and peered up. With a soft susurrus, the canopy parted and another, brighter dragon settled elegantly onto the leaf-covered ground in front of the bemused tiger-dragon. 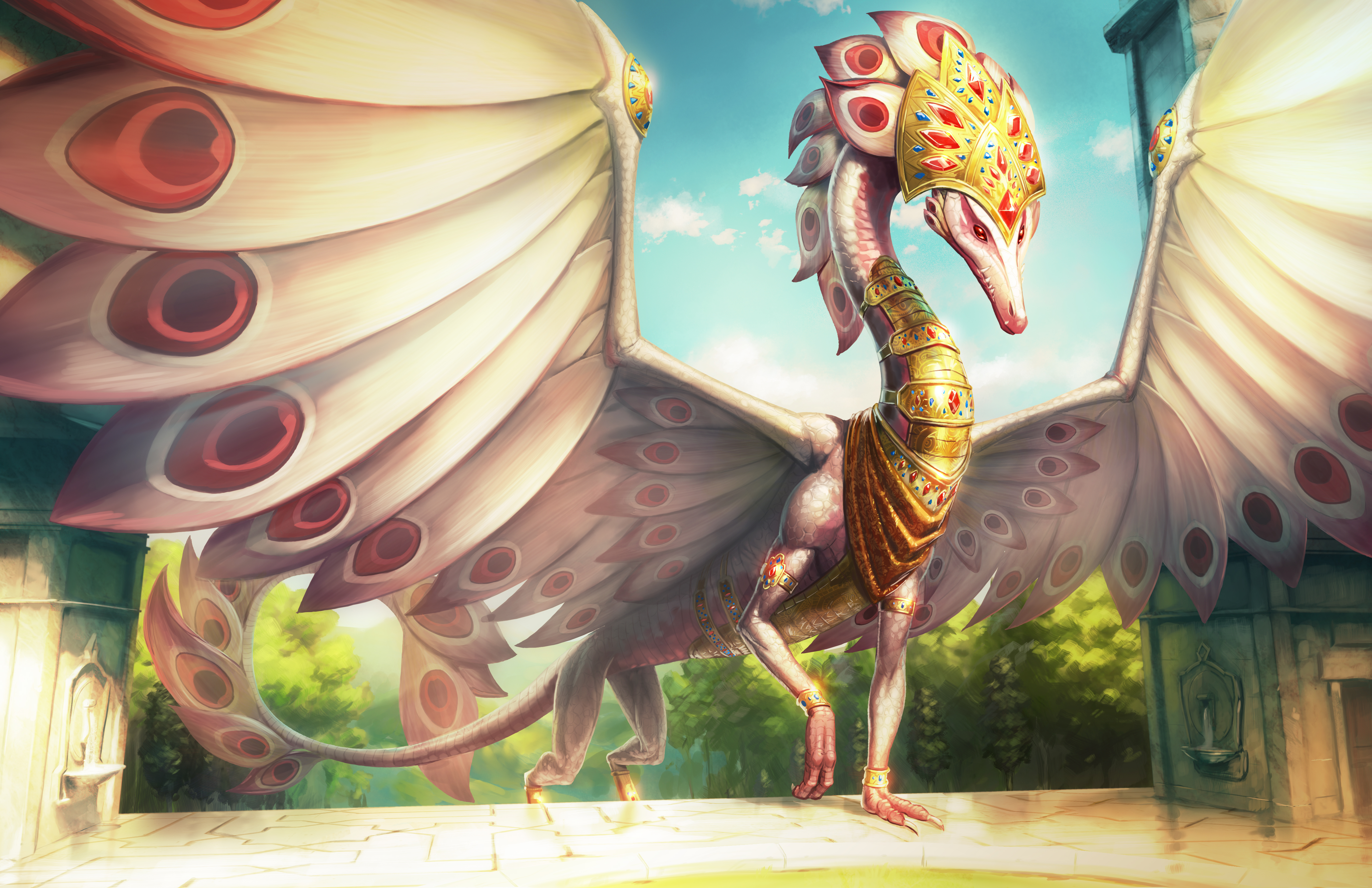 The newcomer swept expansive wings around its body and settled in, wise eyes unmoving from Asura, who sat now on muscled haunches. After a few heartbeats, an elven woman gracefully dropped down from the back of the bright dragon. “Thank you, Nucifera,” she said in a ringing voice that bounced with each word, while she adjusted her gilded finery which glinted faintly in the moonlight. 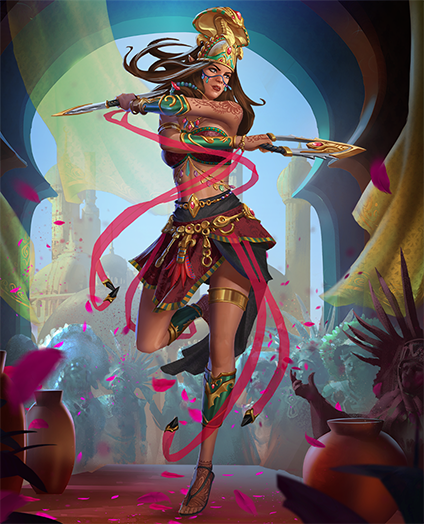 “Hello, Asura. Hunting well, I pray?” she asked with a nod to the tiger-dragon across the clearing. Asura made no reply and watched the fellow dragon Nucifera with a gaze broken only by slow, dangerous blinks. The elven woman continued, “I’m looking for your rider, that scoundrel Suresh. Where is he?”

There was a crashing of footsteps and the snap of fronds and hanging vines from the east a moment before a sweating man burst into the dark clearing. “Suresh. Is. Here!” he proclaimed with the last of his breath before leaning heavily on his ornate spear. 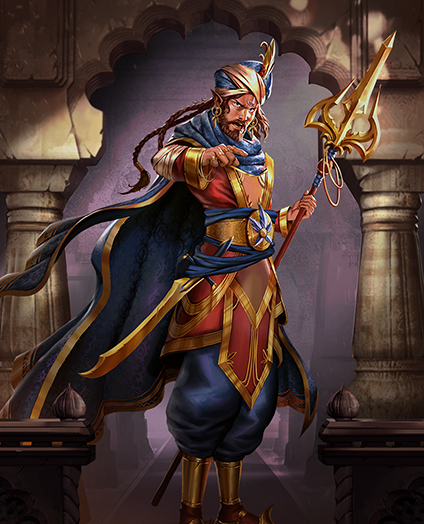 After a moment catching his breath, he gestured with an arm thrown wide at the elven woman and Nucifera, “You’ve flown all this way, Maya, brilliantly catching me at a most inopportune time. Am I the cunning strategist, or is it actually you?” he finished with a smile.

Maya finally let her raised eyebrow drop and returned his smile. “I never much thought about what you two actually did during your midnight hunts. I suppose keeping up with your dragon on foot would be difficult.”

Before he could respond, she went on, “However, Vasant needs both of you back. Danav wreaks destruction as we speak and will reach the city soon.” 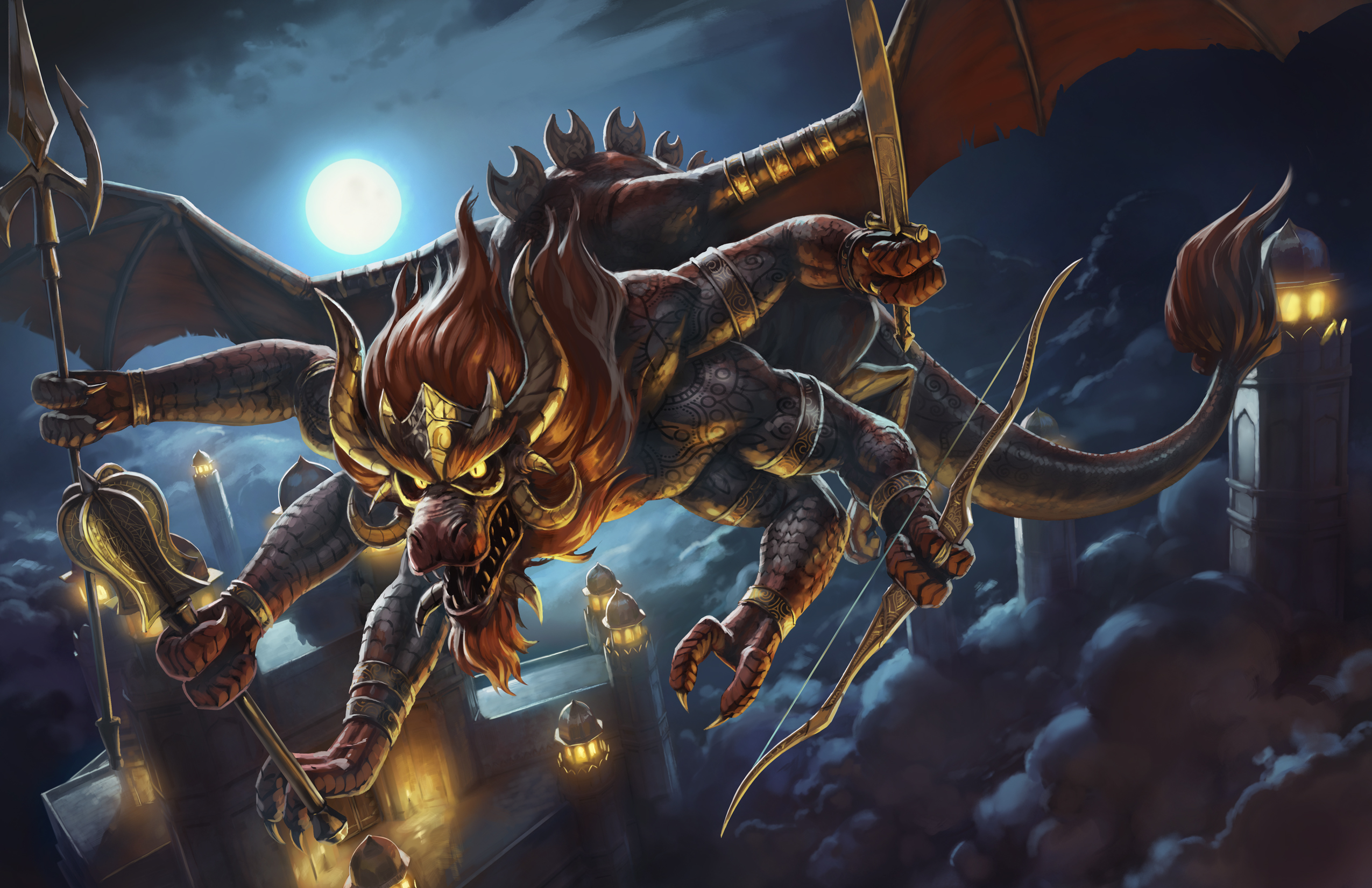 “What? Danav is attacking during Lotusbloom? No, no, the Destroyer isn’t due for years! We haven’t even finished rebuilding from the last time!” Suresh spoke quickly and with a deepening frown.

Maya began adroitly climbing up Nucifera, who did not deign to move. “Danav does as he wills. We knew when it would happen, yes, the two previous times in our lifetimes that he destroyed Vasant. He is not always so predictable.”

“And I suppose as a faithful follower of the great and powerful Naja, you predict that our protector will finally appear this time and stop Danav, for once?” asked Suresh pointedly, who stood unmoving on the edge of the clearing.

“That is what I pray for, and dance for, indeed. Besides, it is our only hope. We will all try our best,” she patted Nucifera affectionately, “but it is the way of the world that Naja the Protector must save us from Danav the Destroyer.”

Suresh shrugged, gripped his spear firmly, and began walking to Asura while shaking his head. “We’re more than a century old and yet it is our elders who last saw Naja. I’m starting to grow tired of defending our doomed city on my own.”

“Not on your own: you have me! And Naja will stand with us yet. Have faith!” As her ringing voice began to fade into the soft silence of the jungle, Maya and Nucifera swept up on petal-wings through the canopy. A minute later, Suresh and Asura followed them.

The light of dawn crept along the colorful houses and soaring towers of Vasant like a brilliant tide. Atop the walls of the city the gleaming blades of spears sprouted from groups of nervous, shuffling soldiers. The wall also held the weight of Nucifera, who rested serenely, and Asura, who trembled with pent-up energy. Above, amongst the few wispy clouds, other dragons spiralled, waiting. The road leading north of the city was choked with people and carts. Off in the distance to the south, across the emerald expanse of the jungle, rose enormous clouds of smoke and embers that resembled thunderclouds. Danav approached, and the eyes of the city’s defenders strained to peer to the south and catch a first glimpse of that infamous dragon.

They all stared with dread to the south, that is, until shouts and gasps directed all attention to the east. Lit by dawn, Naja had returned. 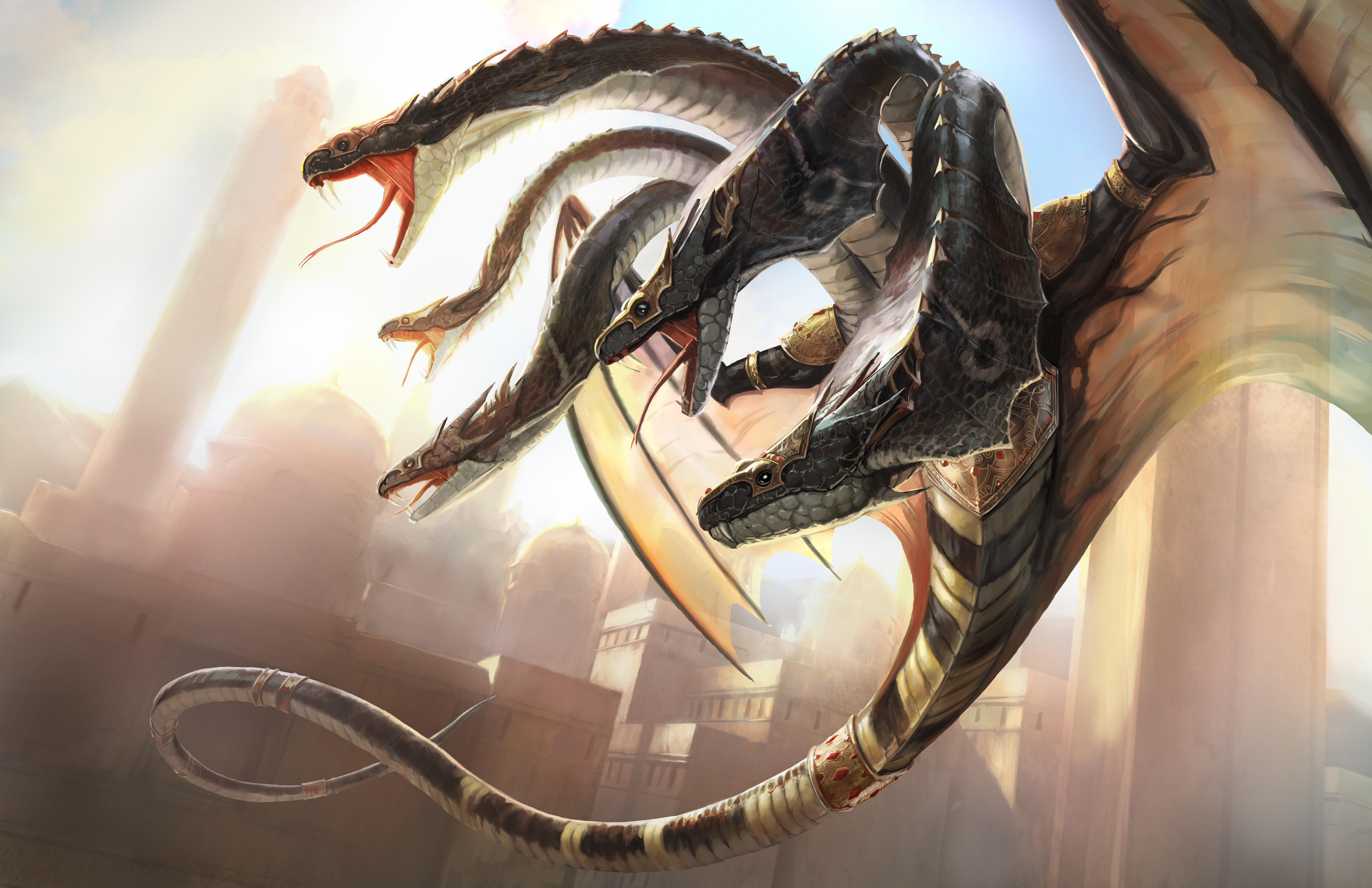