Behold for the Arcanum Mythics have arrived! 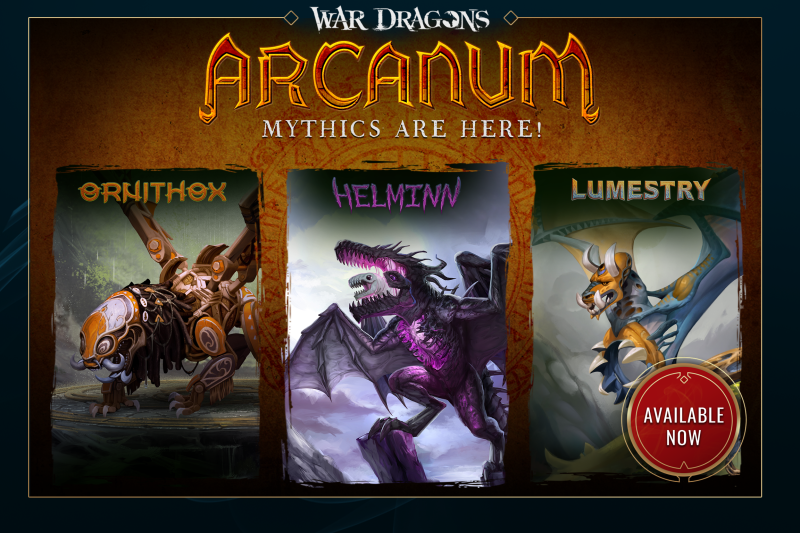 These three dragons each require 2900 Egg Fragments to incubate. Arcanum Mythic Dragons will require Arcanum Legendary dragons. Each dragon will be able to be incubated at incubator level 18 (which requires player level 506). The dragons can be experted at Dragon Level 50, Dragons Den level 140. Players will be unable to expert their dragons until Den Level 140 releases at a later date. 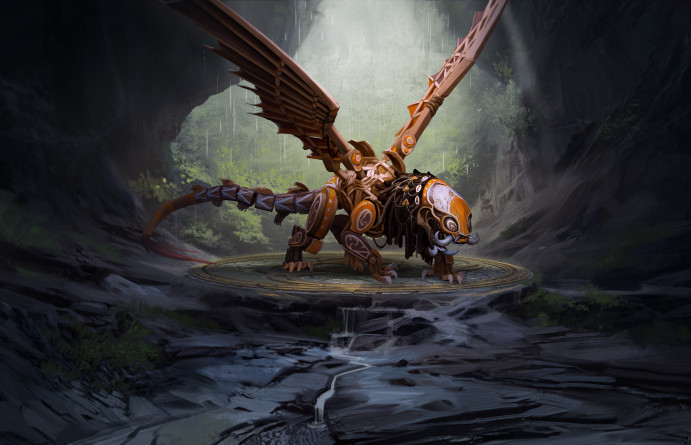 Nature engineered a living beast of wood and cogs.

Deep in the Twilight Woodlands lives a particular tribe of small-framed elves that lack the physical strength to protect themselves. Their chieftain ordered the tribe’s small carpentry guild to construct a war machine. The guild built a protector, “Ornithox,” a wooden dragon, capable of flying by use of intricate cogs, pulleys, and levers.

The chieftain was not impressed by their “toy” and sentenced them to death. The guild members prayed for a miracle. The morning of the execution, a dangerous Stalking Beast lay dead at Ornithox’s feet, though nary a villager had heard neither clatter, clop, nor clank in the night.

Their chieftain formally recognized Ornithox to be the tribe’s protector and the carpentry guild members were released from their sentence, and a feast was had to celebrate their ingenuity.

First cast shields dragon for (30)% of its modified HP and increases the dragon's breath damage by (400)%. Recast to detonate shield, damaging nearby towers for (8)% of dragon's modified HP. Duration: 6s.

Damages a target tower for (0)% of the dragon's modified HP and freezes it for (2) seconds.

Ornithox is a slight alteration on the winning warrior dragon formula. Created by a tribe of frail elven craftsmen, this dragon wields all the abilities of the most powerful beasts they had ever studied. Gale Sphere is a shield that also greatly boosts the power of its breath attack -- it has a short duration, but with careful timing, it can be detonated right before it expires for a bit of extra damage.

Due to the difficulties of engineering a life-like roar into a wooden wyvern, Ornithox has Updraft instead; a large ground targeted AOE freeze that trades ease of use for increased range and control. When piloting Ornithox, use Gale Sphere to burn down priority towers along with aimed Updrafts to keep back islands frozen and unable to fire on you.

Finally, to keep it sustained and healthy on the battlefield, Wind Energy also allows Ornithox to recover health for every building it destroys while the spell is active. 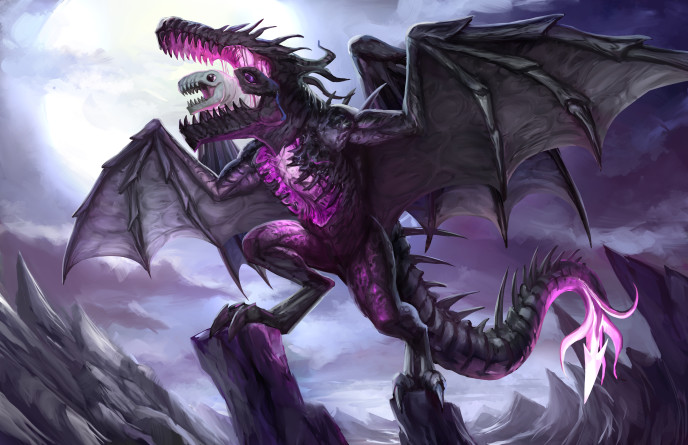 Across Atlas, all know the popular nursery rhyme: “Be ye wary of Helminn’s Mirror, look into still water, your image becomes clearer. Up swims Helminn, yes it’s true, before you know it - Helminn is you.” In contemporary times, this rhyme warns against vanity… but the quatrain’s origins warn against the reptilian parasite Helminn’s most terrifying quality - parasitic invasion.

Helminn infests unsuspecting hosts at random and lives in them until she drains them of resources. Sometimes Helminn infests small dogs or rodents but when Helminn gets a hold of a dragon… that’s when she lets loose and has a little fun.

Drains all Hunter Ammo and restores (10%) of dragon's HP, increased by how much ammo was consumed, up to (60%) of dragon's HP. Increases ammo regeneration by (400%). Duration 2s. Cooldown 6s.

Helminn is a parasitic wyrm that infects a host dragon and pushes its abilities beyond its natural limits.

Helminn’s passive spell, Parasitic Enhancement, greatly boosts the power of normal breath attacks, granting each fireball massively increased damage. With its powerful breath attacks as the main form of offense, Helminn enhances other areas of its host to provide adequate defenses and survivability.

To harden its scales against certain attacks, Helminn employs its Improved Resistances, an adaptive resist spell that restores rage on each use, and provides a Helminn with a powerful resistance to a single type of tower. Try using Improved Restances before you face an island of towers, to gain some rage and prepare against the strongest enemy tower.

When faced with an enemy it can’t resist, Exceed Limitations is a second defensive option that allows Helminn to dodge all incoming attacks and slow down for a short duration. To ensure its survival in dire situations, Consume Host allows Helminn to discard any remaining ammo and convert it to health. After casting Consume Host Helminn’s ammo is regenerated very quickly, allowing this spell to be situational as a reload when low on ammo, or as a strong heal when ammo is full. 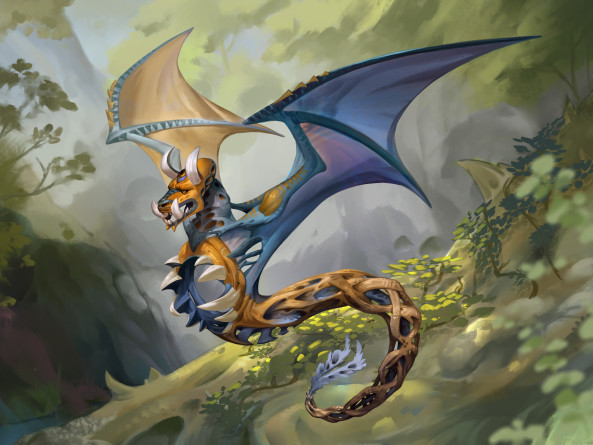 All life is intertwined with plants and stone.

Enderon and F’alathil rushed through their neck of the Glowing Cradle, swinging their practice swords at trees and plants - slaying imaginary monsters. Lumestry flew ominously and silently behind them, absorbing the destruction of their inconsiderate romp into her living tapestry. They stopped and examined their dulled blades covered in green from leaves and vines, thick with sap from wounded trunks, clotted with color from pollen and petal.

As they bragged about their playtime heroics they heard a guttural whine and wheeze. Lumestry had finally caught up with the children and regarded them with rage. The children fell to their knees apologizing, fearing Lumestry’s bloody revenge.

Lumestry did not accept their apologies.

Dragon's empowered breath attack deals (120)% of the dragon's modified hp as bonus damage. If any towers are destroyed by this ability, dragon heals for (10)% of its modified HP per tower destroyed.

Dragon dodges all incoming projectile attacks and supershots for (1) second and deals (4)% of its modified HP as damage to all nearby towers. Instantly reloads ammo clip by (100)%. Duration 1s. Cooldown 6s.

Lumestry is an invoker dragon that relies on precise and consistent use of it’s empowered breath attack to systematically destroy an enemy base.

Invoke: Boulder is Lumestry’s key spell that has the power to destroy most defensive towers and heal the dragon. Use Invoke: Boulder to take out key threats, while your breath attacks wear down the other targets. To compliment the use of multiple invoke shots, Lumestry can cast Clarity In Stillness, a cloak that allows them to stop in place and continue to fire attacks while untargetable.

Weave Earth is another tool that Lumestry uses to maintain her methodical destruction. Weave Earth instantly refills Lumestry’s ammo, and allows her to very briefly dodge incoming attacks. Proper use of Clarity In Stillness alongside Weave Earth is the key to mastering Lumestry.

Finally, Earthquake is a long stun and powerful aoe that, when combined with normal breath attacks, allows this dragon to clear lower priority towers off of bases

Vote for your favorite on our War Dragons Forums!