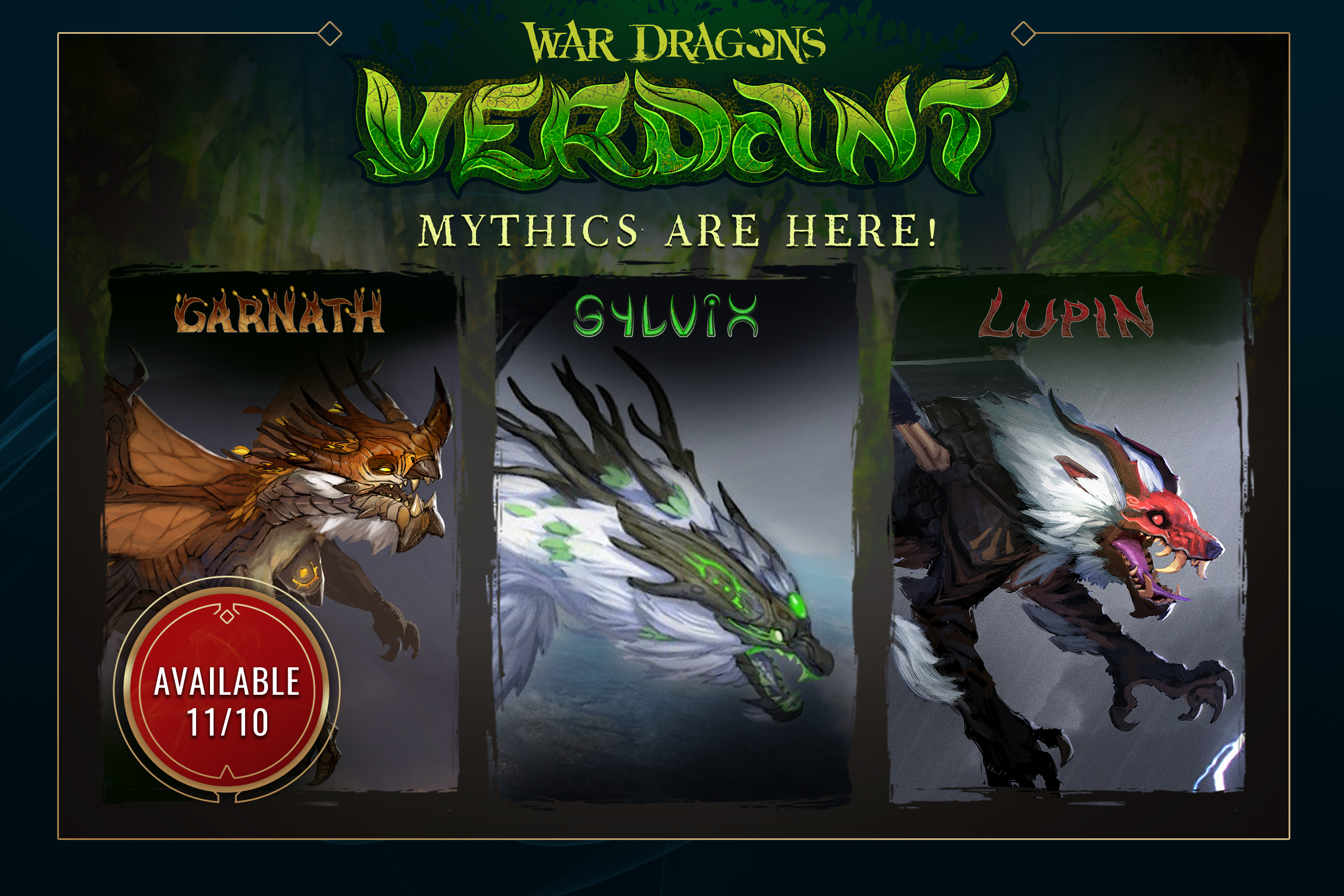 What simple and understated power nature holds over us mere mortals. A single breeze whisks us along our way, cooling our brows, and making whimsical our surroundings. A stray branch tickles our heads as we pass under it. A summer shower creates an electric shimmer. How quickly these simple things can turn into a powerful reminder that we are but small motes that flitter in and out of life so quickly.

The Verdant Mythics watch us as we scurry about, unaware of that power, taking for granted our wretchedly short existences.

Only the truly knowledgeable and humbled Dragon Lords can use this knowledge to win over the respect of Lupin, Garnath, and Sylvix!

These three dragons each require 2750 Egg Fragments to incubate. Each dragon will be able to be incubated at incubator level 17 and player level 495. The dragons can be experted at Dragon Level 50, Dragons Den level 130. Players will be unable to expert their dragons until Den Level 130 releases at a later date. 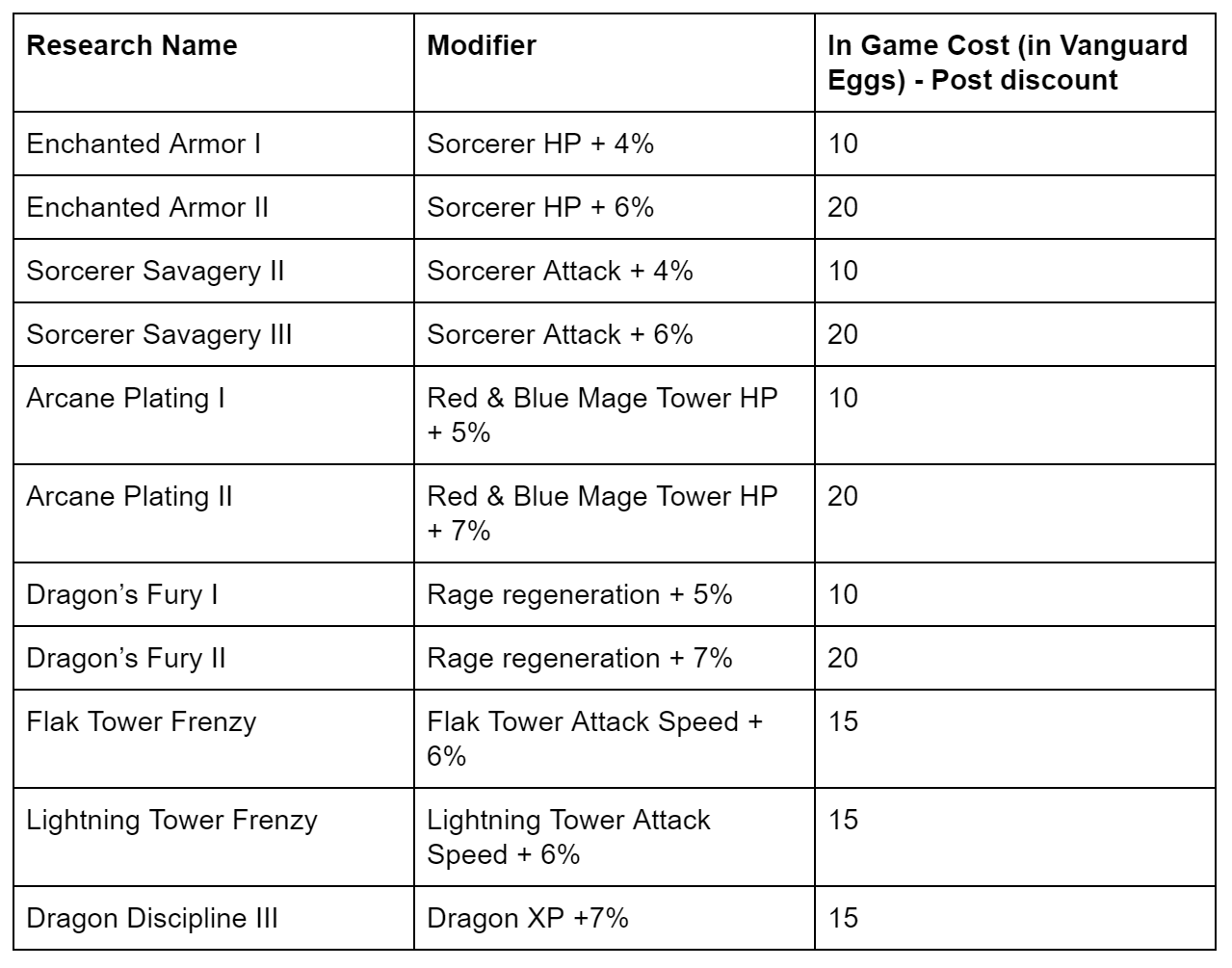 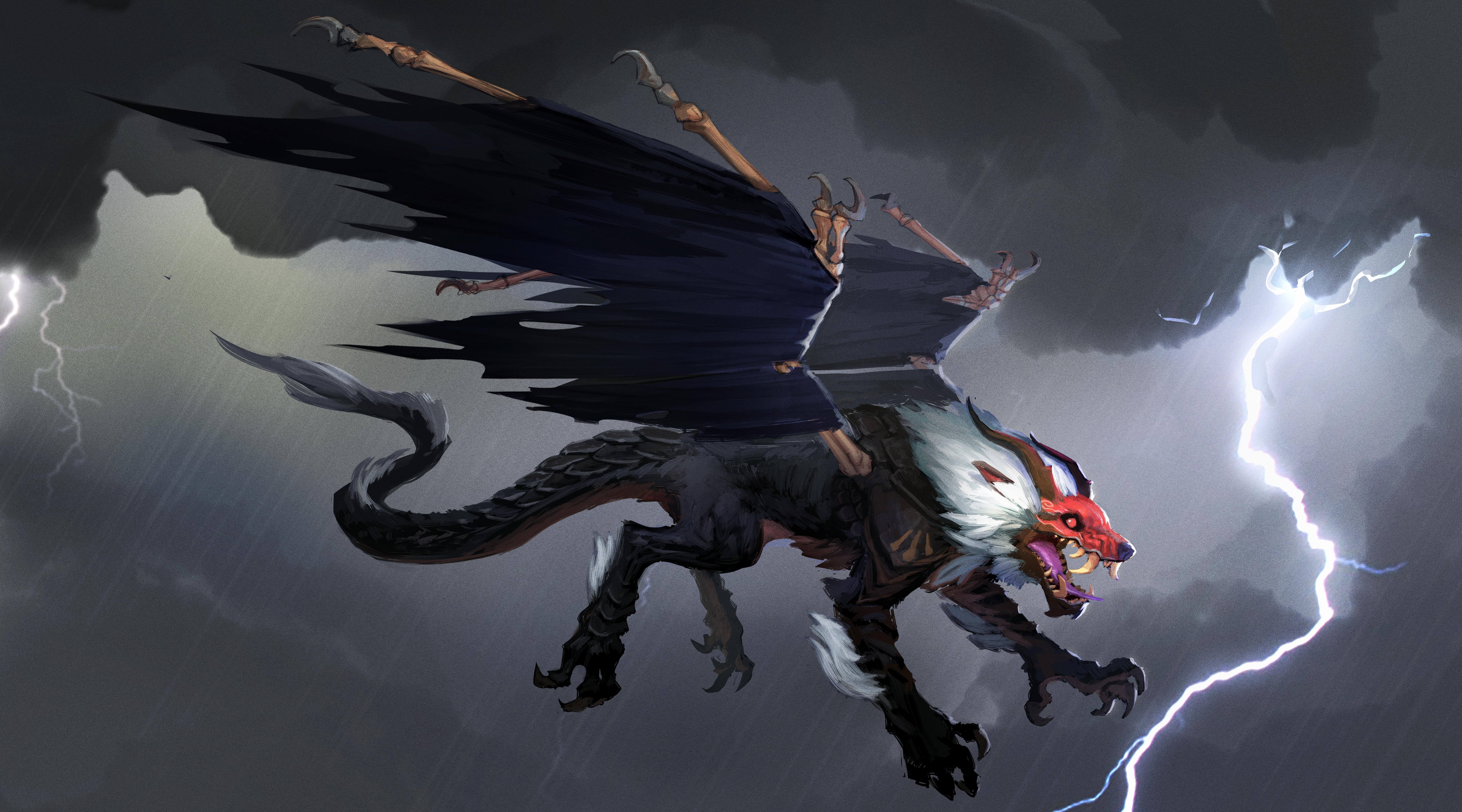 Servant to no one, who brings endless lightning and furor.

There is evidence amongst scholars of the natural order that Sylvix and Garnath have a bond of sorts, which stretches back into misty ages. Lupin meanwhile is a relative newcomer who is still seen often with these two other dragons in recent centuries.

While it is often foolish or outright dangerous for humans to speculate on the relationships between such mighty dragons, many in the academic world wonder exactly how the destructive and thunderous Lupin fits in with the noble and stately Garnath, or the protective and magical Sylvix. It may be up to Dragon Lords instead to dare to find out more about these fearsome elemental creatures.

Prepares two free-target high-damage projectiles that can be fired in rapid succession. Each deals (3000)% of the dragon's attack power as damage. 4s cooldown.

Summons a storm cloud that attacks nearby towers, dealing (2)% of the dragon's HP as breath damage. The summon absorbs (35)% of all incoming damage and provides (75)% increased rage generation.

Damages all nearby towers for (4)% of the dragon's modified HP and freezes them for (3) seconds. Affected towers take (50)% increased damage from all sources.

Dragon gains an invincible shield for (4) seconds. When the shield expires, rage marks are applied to all nearby towers that each restore (0.5) rage. 4s duration.

Lupin is a precision-based sorcerer with tons of single-target damage. Lupin’s main offensive spell is Rolling Thunder, which allows Lupin to fire two high-damage free-target projectiles before the spell goes on cooldown. Rolling Thunder is Lupin’s main means of tower destruction, and should be cast whenever possible.

Lupin’s next offensive spell is the passive ability: Storm Cloud, which automatically summons a raging thunder cloud to attack nearby towers. The summon cannot be killed, and it passively blocks a percentage of all incoming damage. Additionally, the Storm Cloud increases Lupin’s natural rage generation.

Providing both offensive and defensive power, Lupin’s next spell is Flashfire, which damages and stuns all nearby towers, and destroys mid-air projectiles. The spell also amplifies any damage the stunned towers take, increasing the effectiveness of Storm Cloud, and allowing Rolling Thunder to destroy towers with even higher HP.

Lupin’s final ability is Tempest, which begins the battle as a passive. Whenever a tower is destroyed, Lupin restores some rage and Tempest transforms into Thunderous Shield. When cast, Thunderous Shield blocks all incoming damage and mage tower supershots. When the shield expires, rage marks are applied to all nearby towers, and Thunderous Shield reverts back to Tempest. Destroying another tower will transform Tempest again, and this cycle can repeat. Lupin has a powerful spell kit with many offensive and defensive tools, but the dragon completely lacks healing utility. If flown well, Lupin can take down the most difficult bases with nought but a scratch, but any mistakes or mistimed abilities are difficult to recover from. 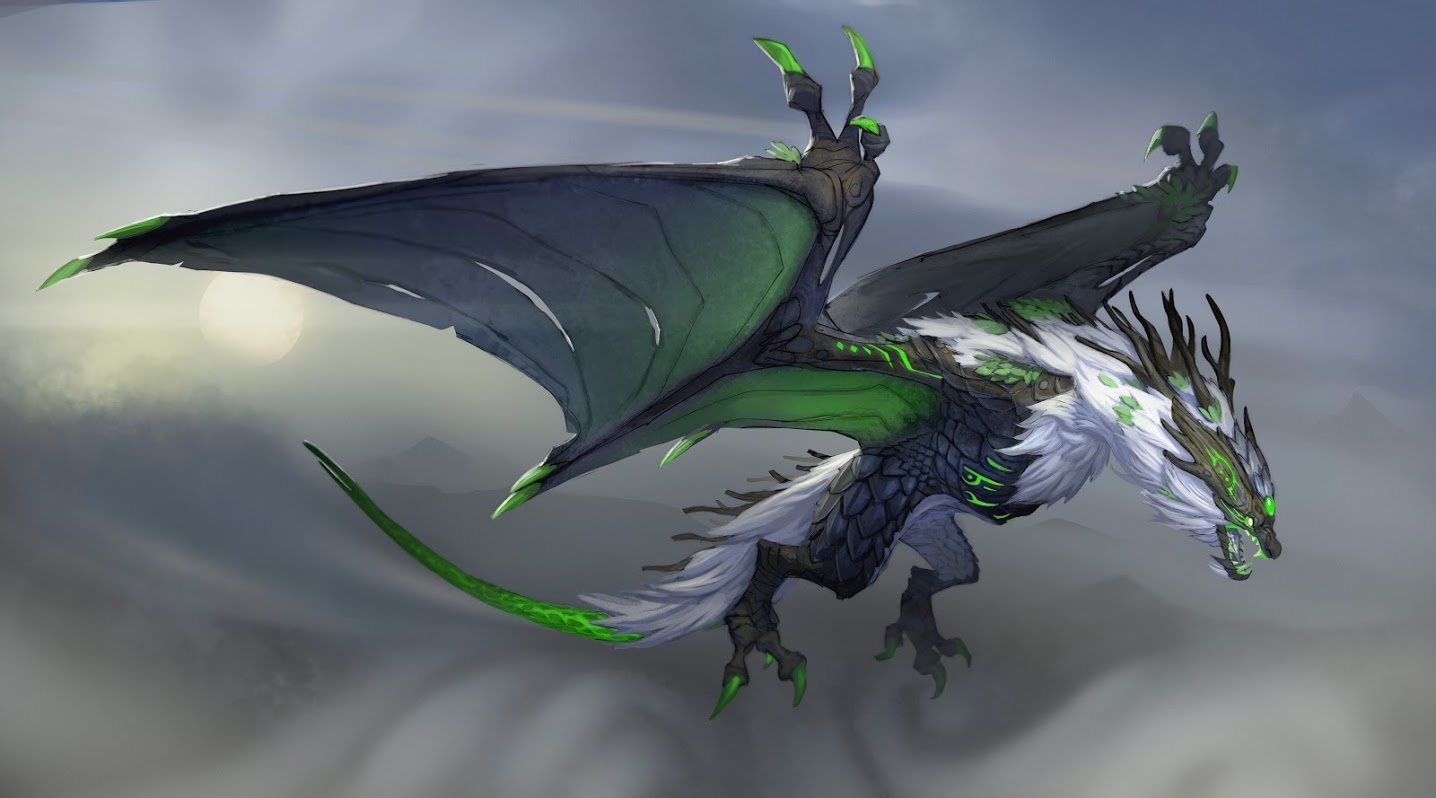 A powerful warlock, Sylvix draws deep upon the power of runes and hexes. These symbols were young when the world was young, and now they shake with ancient power when properly inscribed.

Sylvix keeps this knowledge close and uses it to watch over the groves and forests of Atlas. So it would be a gloom-laden tragedy if this runic power ever fell into the wrong hands or the wrong claws.

Damages a target tower for (16)% of dragon's modified HP and freezes it for (3) seconds. 4s cooldown.

Dragon dodges all non-beam attacks for (4) seconds and damages nearby towers for (9)% of the dragon's modified HP each second. Reloads (100)% of the dragon's ammo on cast. Dragon flies at (25)% speed during spell's duration. 4s duration, 4s cooldown.

Cast to switch between Beam resist and Howitzer Resist. Restores (0.25) rage and (4.5)% of dragon's modified HP on cast. 1s cooldown.

Sylvix is a well-rounded hunter with a strong mix of spell and breath damage. Sylvix’s main offensive spell is Paralyzing Hex, which damages and freezes all towers in a large target area. Paralyzing Hex is a powerful means to disable key towers while you deal with the rest of an island. Additionally, the spell’s freeze effect can disrupt mid-air projectiles if timed correctly.

Sylvix’s main defensive spell is Rune Storm, which dodges all incoming projectiles, periodically damages nearby towers, and reloads all of Sylvix’s ammo. Rune Storm can be used offensively to burst down towers with a barrage of breath attacks or defensively to protect Sylvix from mage tower supershots. Note that Red Mage towers will only block Rune Storm’s damage. Sylvix can always cast the spell for its defensive benefits.

Sylvix’s next ability is the passive spell: Enfeebling Hex, which debuffs any tower hit by Sylvix’s breath attack to take increased damage. This spell effectively doubles the dragon’s normal breath damage, while also boosting the power of its other damaging spells. A strong combo is for Sylvix to spend all of its ammo applying Enfeebling Hex to many towers, then casting Rune Storm to refund the dragon’s ammo and massively increase Rune Storm’s AOE damage.

Sylvix’s final spell is Runic Scales, which toggles the dragon’s resist between blocking Beam Tower damage and Crystal Howitzer damage. Additionally, Sylvix restores some health and rage whenever they toggle their resist. Sylvix needs to balance spamming Runic Scales to sustain rage and health, while also ensuring that the best resistance is active at the right moment. Beam Resist is excellent when Rune Storm is active, as beam attacks penetrate the spell’s dodge. If Rune Storm is on cooldown, Howitzer resist can save Sylvix from an otherwise lethal Howitzer hit. 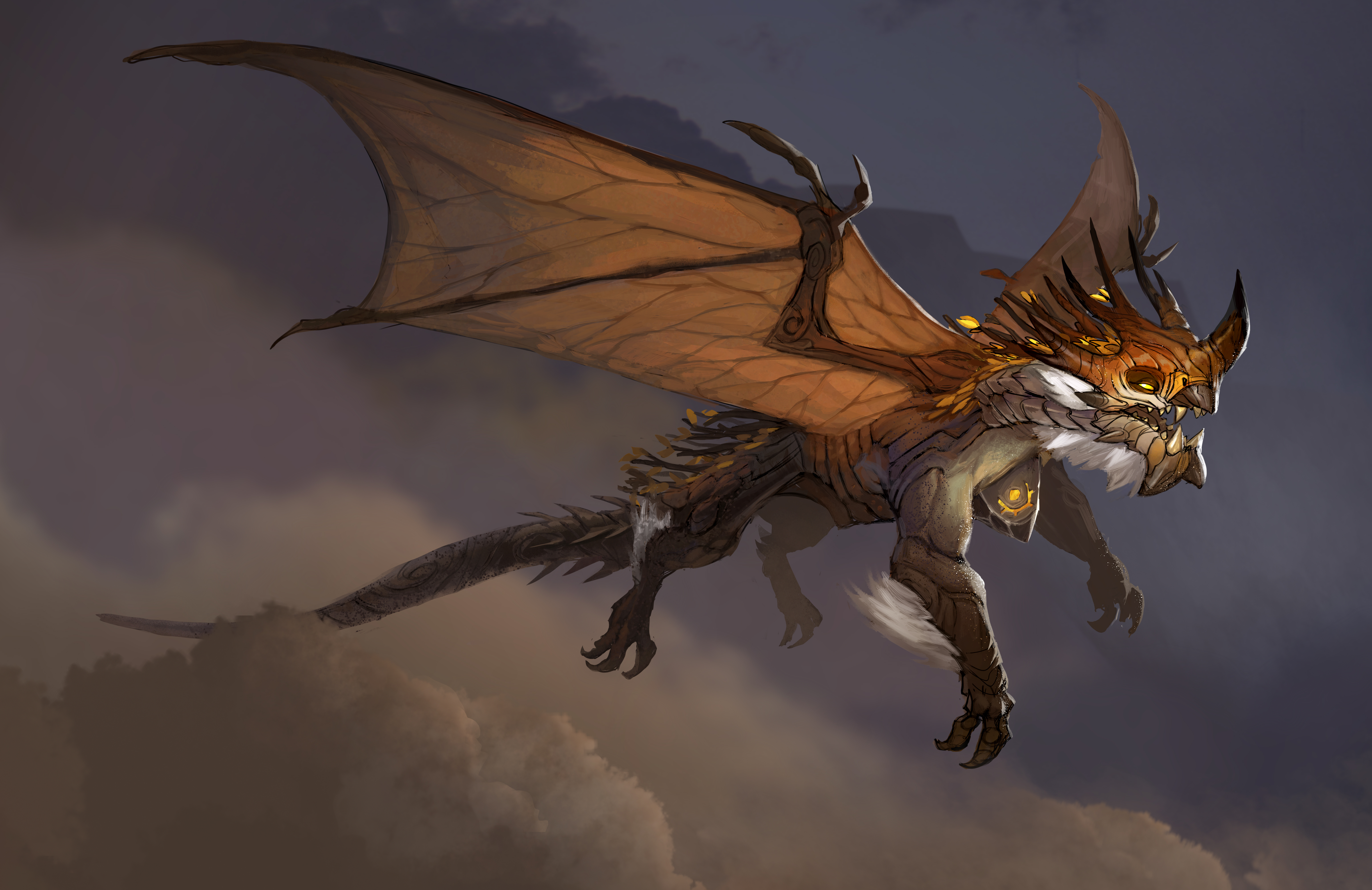 Fomhar's champion, who rules the realm of the Autumn Harvest.

Entering the ethereal, otherworldly place known as the Autumn Harvest is no easy feat. The explorer Isilda spent eight years of her life trying to reach it, to no avail, and it is whispered among the learned that the dragon Nollaig also seeks access to this realm.

Yet for beings, human or otherwise, close to nature and favored by Garnath, the Harvest Champion, reaching the Autumn Harvest is as simple as taking a step forward under a drifting brown leaf or placing a hand against an old tree.

The few written accounts of this domain describe it as an open, airy forest of endless autumn, caught right at twilight. It is believed that as summer comes to an end, Garnath opens a connection between that realm and Atlas, ending summer and letting the crisp air of autumn flow through the land.

Fully heals the dragon and damages all nearby towers for (30)% of the dragon's modified HP. Dragon becomes invincible for (2.5) seconds. 2.5s Duration. 10s cooldown.

Damages nearby towers for (8)% of the dragon's modified HP and freezes them for (4.5) seconds. Affected towers take (50)% increased damage from all sources.

Garnath’s most impactful spell is Autumn’s End, which massively damages all nearby towers, fully heals Garnath, and briefly makes them invincible. Autumn’s End is the payoff for accumulating tons of rage with Harvest Mantle, and Garnath needs to carefully manage its rage to cast this incredibly powerful spell. To do this, Garnath has some lower-cost support spells.

For defense, Garnath has Reaping Roar, which damages and freezes all nearby towers, and also debuffs them to take increased damage. Reaping Roar’s primary function is to disrupt mage tower supershots and protect Garnath’s rage resources, but the spell also presents many opportunities for careful decision-making. Deciding to use Reaping Roar to enhance Garnath’s breath and spell damage may be the correct choice, even though casting the spell puts you farther away from casting Autumn’s End.

Vote for your favorite on our War Dragons Forums!