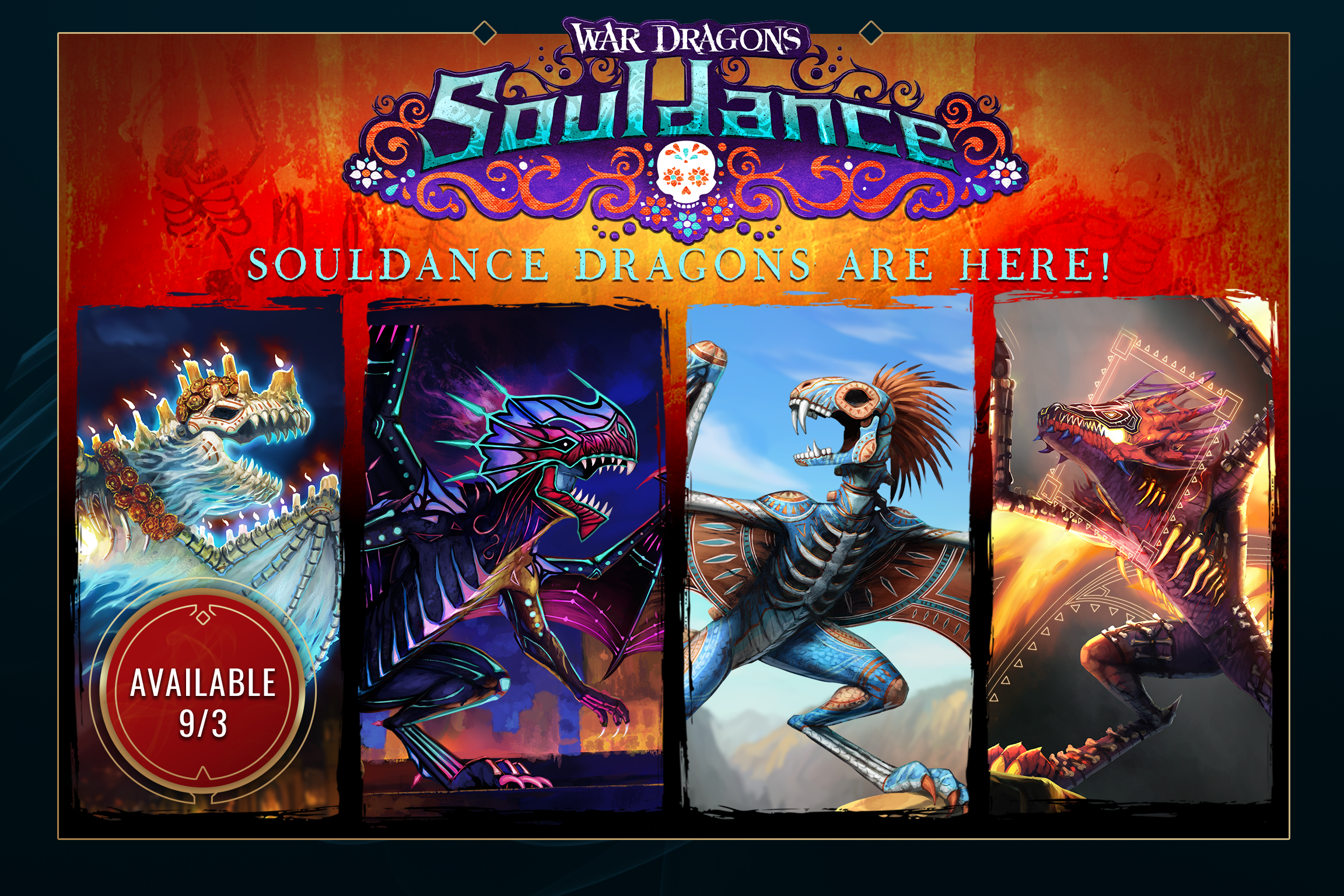 The Realms of the Souls and Living coexist in a parallel state, apart, save for a narrow corridor that serves those transitioning from the Living to the Dead. The infrequent entanglements of the realms are the stories of myth, legend, and superstition, their denizens respect the metaphysical boundaries that keep the planes of existence separate.

Once a year, however, the inhabitants call upon each other and let slip the mysterious shroud that divides. Living and Dead intermingle once more in a united celestial plane. They dance, they feast, and they war. This night is the Souldance.

Honor thy ancestors and fight for eternal glory! It follows you from this life into the next. Let the phantasmal beasts ferry you to war against living and dead alike! Let the gatekeepers of the realms stand by your side -- dragon riders and dragons alike! Traverse life and death bravely this Souldance Season, Dragon Lords!

The Souldance Season follows the same basic structure as Sunscorch with some additional changes.  The major branches will contain 6 season keys each, while the Mission Boost branch will contain 1 season key.  The Festive Dragon branch is undergoing an overhaul and its specific structure will be announced prior to week 9.  19 total keys are required to unlock your choice of either Mythic Dragon. Mythic Dragon branches will be available at no Sigil cost and all of the Dragon’s evolution stones can be claimed for free once the branch is unlocked. All Dragon branches will have a Verdant Tier evolution stone available to evolve them to the highest current in-game Tier.

Similar to previous Seasons, players will have a choice-based prize where Gold Chests are typically found in a branch. Just like Dragon Rider crafting shards, players will now have a choice of what resources to collect from certain prizes in Seasonal branches. The choices will allow players to claim either Gold Chests or a static amount of items that can be found in Gold Chests, such as Elemental Embers, Inner Fires, and Timers. If a Seasonal prize would originally distribute multiple Gold Chests, the equivalent value of that resource will reflect the quantity of Gold Chests in the alternative choice.

For example: a player comes upon a prize in a Seasonal line that originally offered Gold Chests to claim. Now, this player has the choice to claim the Gold Chests or instead claim Elemental Embers or Inner Fires. The prize will be an either/or structure, so once the chosen prize is claimed, it cannot be traded or changed.

Festive Week not shown, but there will be a Festive dragon!

Limited Time Branches will make a return in the Souldance Season! These branches will focus on a variety of resources and at least one branch will appear throughout the season for one week at a time. After the week duration has expired, the branch will disappear and prizes in them cannot be claimed further, so be sure to claim them while they’re available!

Limited branches themselves will be much shorter and cost fewer Sigils than their Legendary branch counterparts, and they will feature a multitude of items to help you on your War Dragons journey! You’ll even have the opportunity to obtain Seasons Key in some limited branches! More information about these branches will be announced as they become available 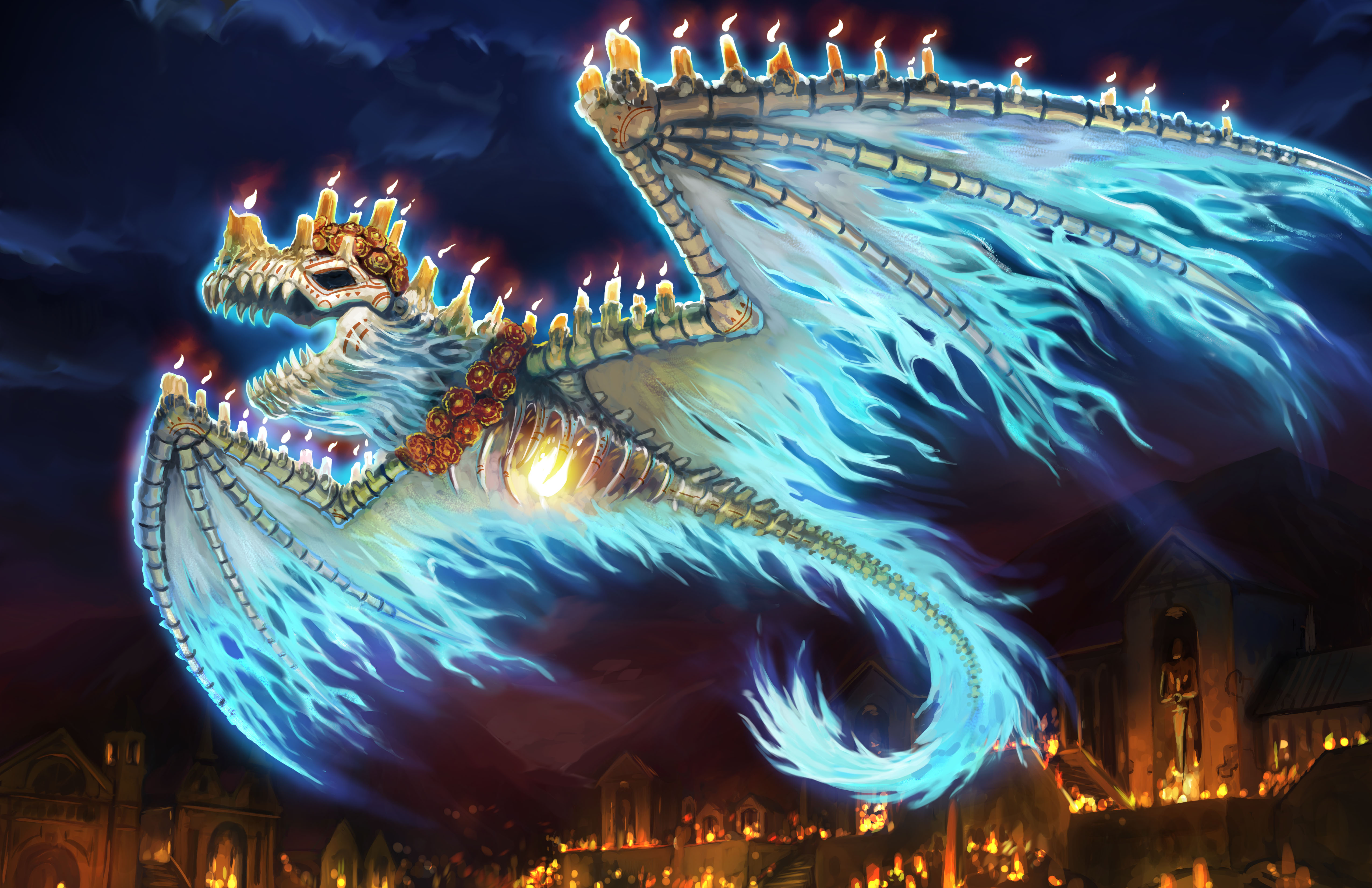 Dead and gone, but not forgotten

Dealing with the spirits of the departed is a tricky business at the best of times. The dead do not view our world the same way we, the living, do. The hardships and privations that we face each day--putting food on the table, hoping our lordship doesn’t anger the neighboring kingdom again and get our house burnt to a crisp--all of that fades away with the release of death. They remember our world and their memories, but they are now removed from it, with a different view of things. All of that is undoubtedly true to an even stronger degree when it comes to a dragon who has passed on. So, the best we can do is pay the appropriate respects to Marav and hope that it does not turn its dead gaze on us during the tumultuous time of Souldance.

Marav is a combo-heavy invoker that focuses on explosive, AOE damage.

Marav’s empowered attack is Invoke: Remembrance, which heavily damages all towers in a large area of effect. A simple yet powerful combo for Marav is to damage several towers with the dragon’s normal breath attack and then finish them off with Invoke: Remembrance.

Since one AOE spell is never enough, Marav also has Ghostly Barrage, which fires multiple projectiles at randomly-chosen nearby towers. Ghostly Barrage tends to spread out its destructive power, but the spell becomes more powerful against islands with fewer remaining towers. Another powerful combo is to focus down the red mage tower with Marav’s normal breath attack and Invoke ability, enabling Ghostly Barrage to finish off the remaining towers damaged by Invoke: Remembrance’s AOE.

Marav’s final spell is Spectral Resist, which passively blocks some damage from Flak towers and physical towers. The resist can be toggled off, and doing so will heal Marav for a moderate amount. Spectral Resist is Marav’s only means of healing, so the spell must be managed carefully. Disembody provides a safe opportunity to disable the damage resistance, but remember to re-enable the resist as soon as possible. 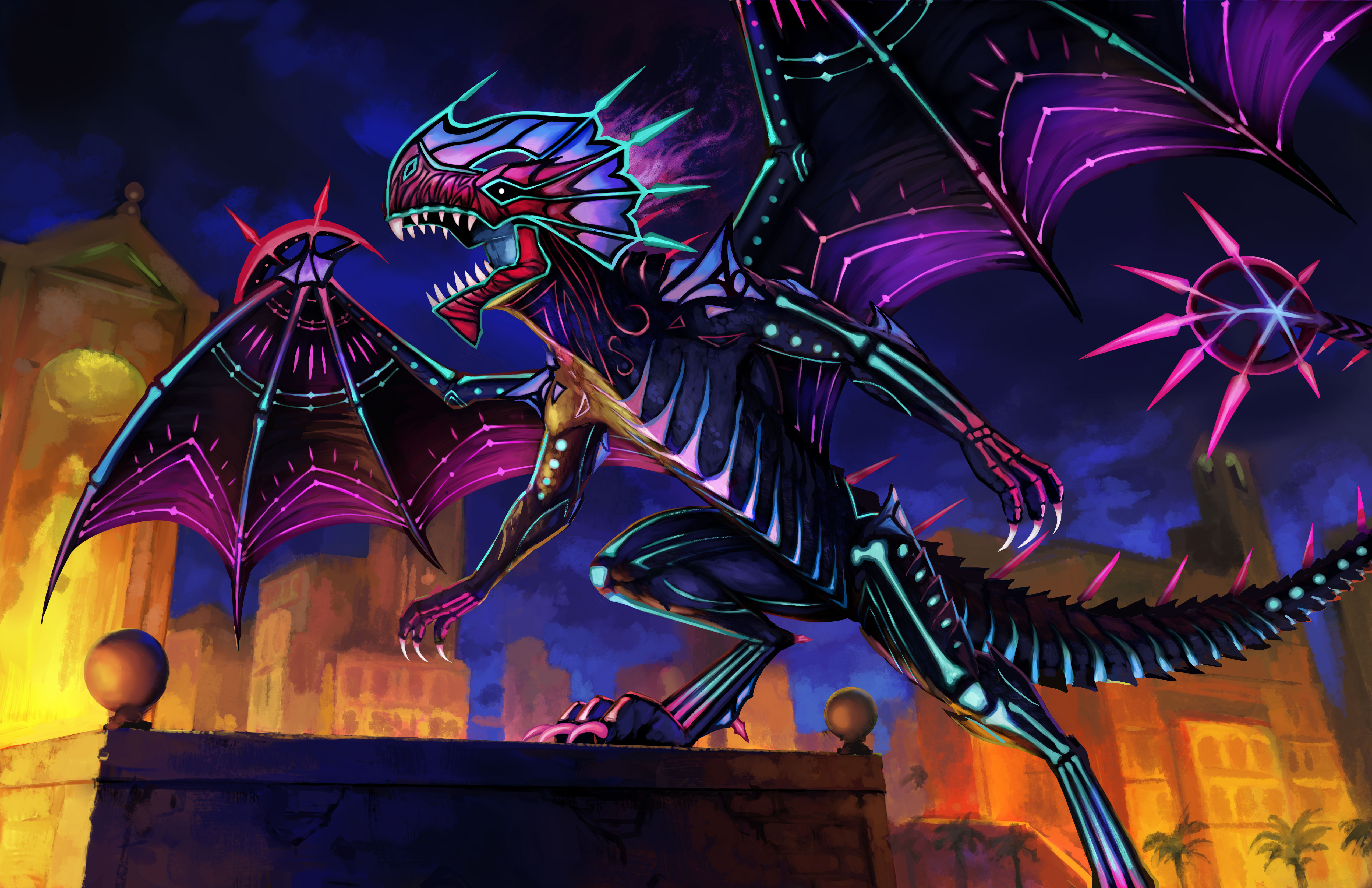 Part of death is the celebration of the life that came before!

Welcome, my friend! Is this your first Festival of Souls? Yes? Then you are very lucky! Drink and be merry with us, as we celebrate the lives of those who have passed on. Set out a candle for those you have lost, and here, put some food out for them too! Oh, and don’t leave too early tonight: you may just catch a glimpse of Luzok if you stay late enough. That is a sight you do not wish to miss!

Luzok is a well-rounded warrior with a mix of sustain and single-target damage.

Luzok’s main offensive spell is Vivid Bolt, which restores health on cast and fires a high-damage projectile at a predetermined target, prioritizing blue mage towers. Vivid Bolt is Luzok’s most reliable way to destroy threatening towers and should be cast whenever possible.

Luzok’s other offensive spell is Chromatic Breath, which increases the dragon’s breath damage for a short duration. Chromatic Breath has no cooldown and can be constantly active provided that Luzok has enough rage. To accommodate this, Luzok has the two-stage spell: Festival of Souls.

Day of Celebration is first in sequence, and heals Luzok for a small amount on cast. The next spell in sequence is Night of Farewells, which restores some rage on cast. Festival of Souls can be repeatedly cycled throughout battle, provided that any blue mage towers have been dealt with. The rage from Night of Farewells can be used to freely cast Vivid Bolt or to maintain a long period of bonus breath damage with Chromatic Breath.

Luzok’s final spell is Flash, which dodges all projectile attacks for a short duration. Flash is best used to protect Luzok from Crystal Howitzers, Dark Flak towers, and other high-damage threats. Luzok must take particular care to avoid burst damage, as the dragon heals mainly through small, repeated spellcasts, and can be brought down quickly if Flash is unavailable.

Patron of the Dead 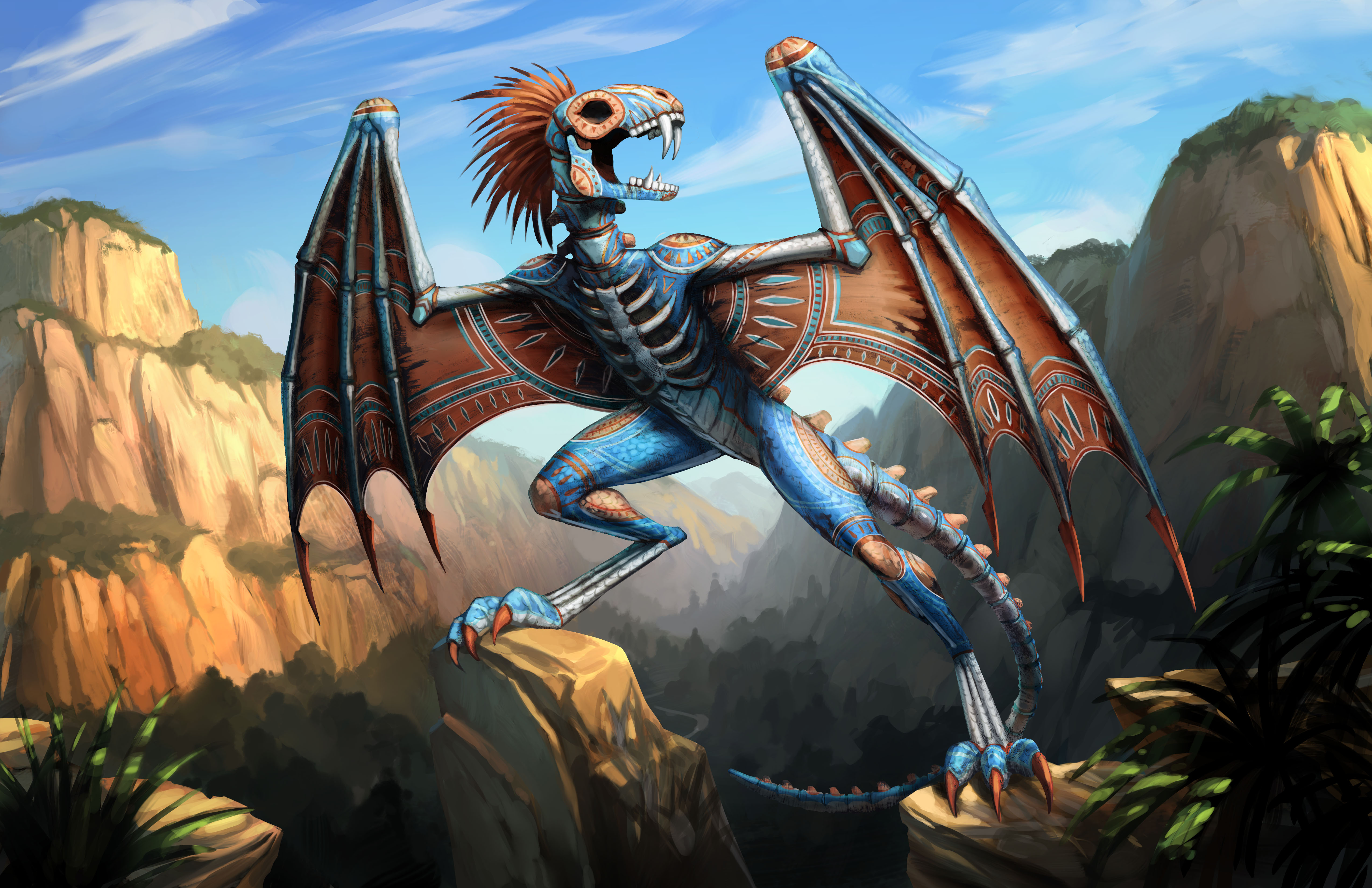 Human, dragon, all are equal in death

Deep in the Windblown Shroud is a crumbling temple dedicated to Calavore. Inscribed above the towering entryway is the simple phrase “Remember death”. During the time of Souldance this temple is transformed with colorful decorations and endless candles burning away into the night, all to honor Calavore and the countless dead who are believed to be sheltered in the afterlife by this dragon.

Calavore is an offensive hunter with extremely high burst damage.

Calavore’s primary ability is the two stage spell: Burial Rites. The first spell in sequence is Eulogy, which massively increases the dragon’s breath damage for a short time. After casting Eulogy, Wake becomes available, which damages and freezes all nearby towers.

Calavore’s defensive spell is Cross Over, which briefly cloaks the dragon and reloads a portion of its ammo. Upon uncloaking, the spell damages all nearby towers. Cross Over has no cooldown, so the cloak can be repeatedly cast and cancelled to dodge multiple attacks from defending towers. Cross Over can also be effectively combined with Eulogy’s bonus damage for even more empowered breath attacks.

For surgical tower destruction, Calavore has Dirge, which heavily damages all towers in a small target area. Dirge should prioritize towers that disrupt Calavore’s ability to burst towers. Both Storm and Earth Flak shields, as well as Dark Flak and Ice Flak supershots can all shut down Calavore, and must be promptly dealt with.

Calavore’s final ability is the passive: Sin Eater, which heals the dragon and restores some rage whenever a tower is destroyed. Calavore doesn’t have access to any on-demand healing, so mistakes are particularly punishing for this dragon. But should you plan carefully and pick your targets well, Calavore can sustain through even the longest of battles.

Chill of the Grave 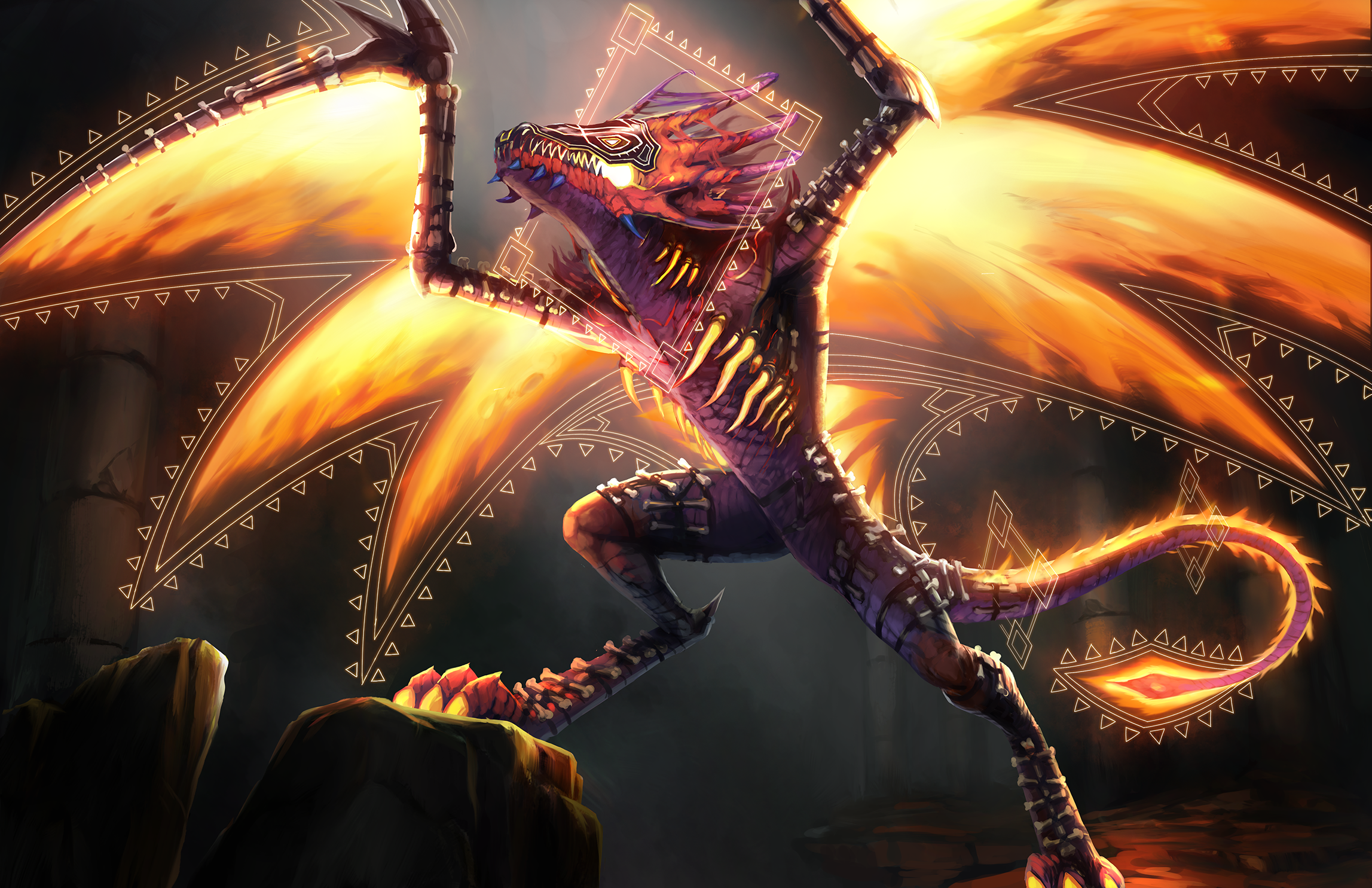 The dragon Sepulla was created, birthed, or otherwise came into being in the small village of Comala three hundred and twenty seven years ago. The accounts of the few survivors of that particular night three centuries ago are fractured and unreliable, so the known facts are few. There is the date itself, the fate of Comala, and Sepulla. The humble hovels and streets of Comala can still be seen, but no one lives there now and it is a place of shadows and whispers. Sepulla meanwhile clearly burns with magical power, but how it came to be or what it wants are dangerous and unknown facts. It is wiser to give this dragon and its powerful madness a wide berth.

Sepulla is a utility-heavy Sorcerer who focuses on protecting its summon.

Sepulla’s main ability is a passive spell: Rest in Peace. At the beginning of battle, Sepulla automatically summons a powerful warrior dragon to attack nearby towers. The summon has an incredibly large health pool and protects Sepulla by absorbing almost all incoming damage.

The catch is that none of Sepulla’s other spells deal damage. Instead, Sepulla must use its utility-heavy spells to support and protect the summon. One of these utility spells is Deathly Shriek, which freezes all nearby towers and causes them to take increased damage. Deathly Shriek can be used to both disrupt high damage towers and protect Sepulla from mage tower supershots. Sepulla’s summon also benefits from the spell’s damage amplification, so applying it early in battle can lead to a lot of extra damage.

Another Utility spell is Ashes to Ashes, which, on first cast, debuffs towers in a target area to deal reduced damage. If Ashes to Ashes is recast on the same tower, it will instead be destroyed. Ashes to Ashes is best used on high-damage towers like Crystal Howitzers and Dark Flak towers, but the spell can also be used to finish off towers that the summon has passed over.

Sepulla’s final spell is Marigold Mark, which marks a target tower. If the tower is destroyed by Sepulla or its summon, then Sepulla will restore some rage. For best results, try to apply Marigold Mark to whichever tower the summon is attacking. Sepulla’s summon is its lifeline. Should the summon fall in battle, Sepulla lacks the damage and survivability to survive on its own. 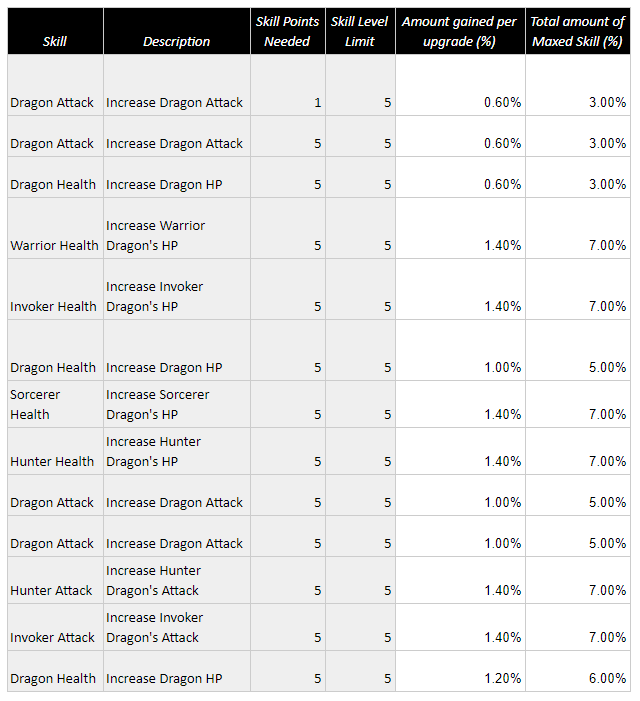 Branch Details: Muertok’s Season Branch will have his/hers Rider Shards and Crafting Shards mixed in throughout the entire branch.

Feast heartily, dance, and then fly on over to the official War Dragons Forums to discuss the Souldance with the community!