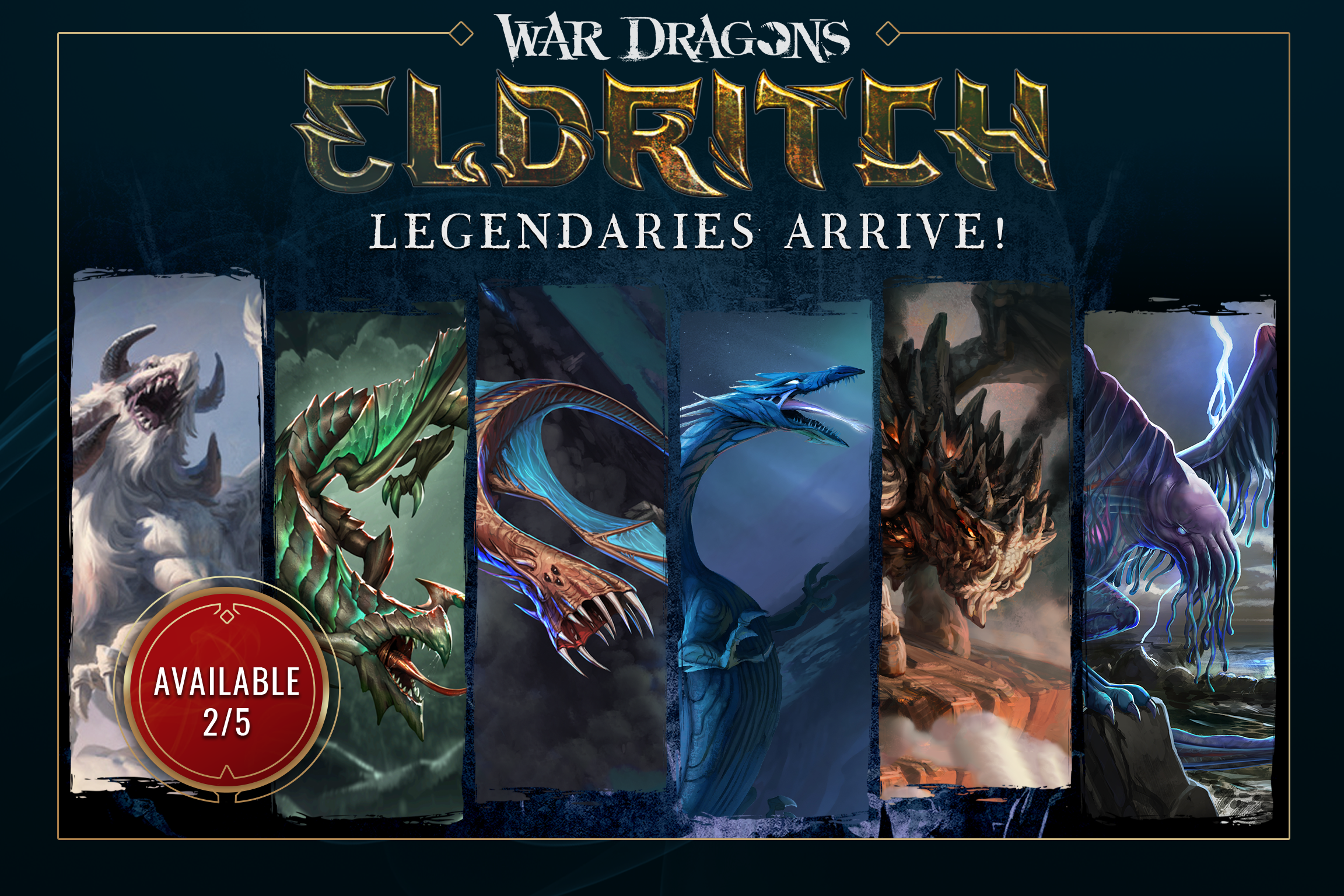 Feel the Darkness tugging at your Soul

The Legendary Eldritch Dragons arrive this week in War Dragons! Some say that madness is a window to a world too chaotic for mortal minds to understand. But to those who’ve already descended into it, the release brings freedom and power. Are you ready to succumb to madness with Yetin, Annelid, Vexa, Caldur, Caeryss, and Glossia, or will you harness them as your own?

Join Arelyna as she flies the new Eldritch Dragons live on stream this week! Catch the show on Twitch this Wednesday, February 5th, at 3pm PT.

These 6 dragons will release at a cost of 1400 Egg Shards per dragon. Each dragon will be able to be incubated at incubator level 16 and player level 468. The dragons can be experted at Dragon Level 40, Dragons Den level 115, and player level 477. Players will be unable to expert their dragons until Den Level 115 releases at a later date.

With the release of the Eldritch Tier, we’ll be making some updates to Tier-based Discounting in order to smooth out the costs to progress from Red to Eldritch Tier. Just like previous tier releases, Breeding Token, Food, Experience, and incubation time costs will also be reduced proportionally. However, as before, the eggs and time required for research will not be reduced.

The following discounts will go into effect: 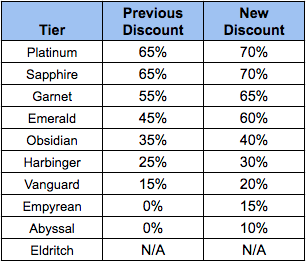 *  As some may have noticed, the cost of the previous tier is also being reduced this time. Please note that this is neither in error, nor is it necessarily the new normal for future tiers.

Additionally, there will also be a new combination of Base-related and Dragon-related Research tasks that will become available in the Research Hall at the same time that Eldritch Dragons are available in-game. Here’s a look at what you can expect for new tasks: 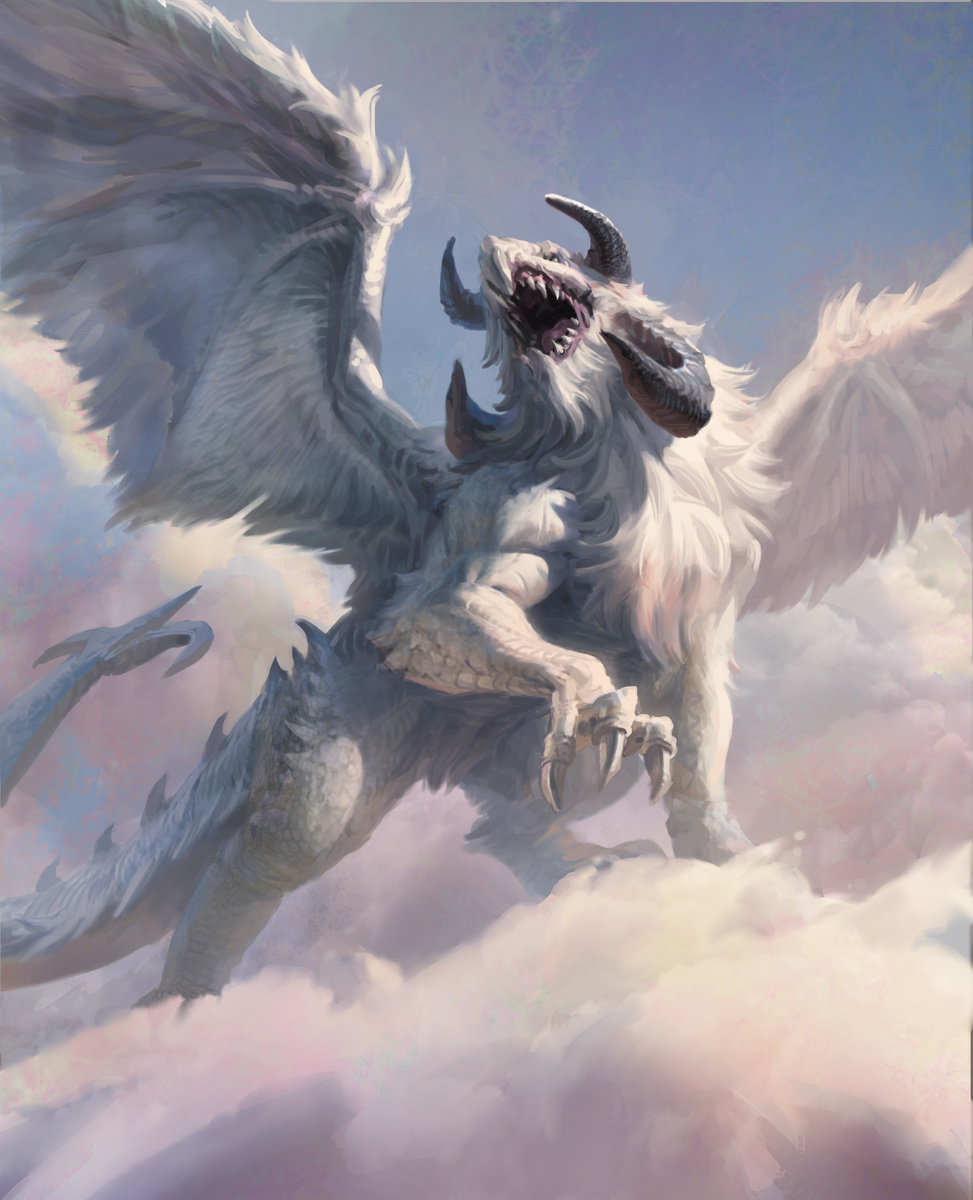 A prehistoric beast, rarely seen. Its weatherproof fur makes it an adept flier

Yetin dragons are so rarely seen that in the Stygian Glaze the phrase “going to find a Yetin” has become a byword for a useless trip, similar to “wild goose chase” being used in warmer climes. Recruiting expedition members has therefore become very difficult and involves a lot of laughter for Dragon Lords who truly wish to find and tame one of these dragons.

Yetin is a durable warrior that focuses on debuffing and bursting enemy towers. Yetin’s primary spell, Terror of the Peaks, has two stages. Abominable Roar will damage and freeze all nearby towers, destroy any mid-air projectile, and cause the affected towers to take increased damage. After casting Abominable Roar, Abominable Breath will become available, which will massively increase Yetin’s breath damage for a short duration. Yetin also has Spell Flux, which is best used to destroy enemy mage towers and enable the dragon’s colored spells. Finally, Yetin has Bloodfury, which will provide the dragon with the rage it needs to cast Spell Flux and frequently cycle through Terror of the Peaks. 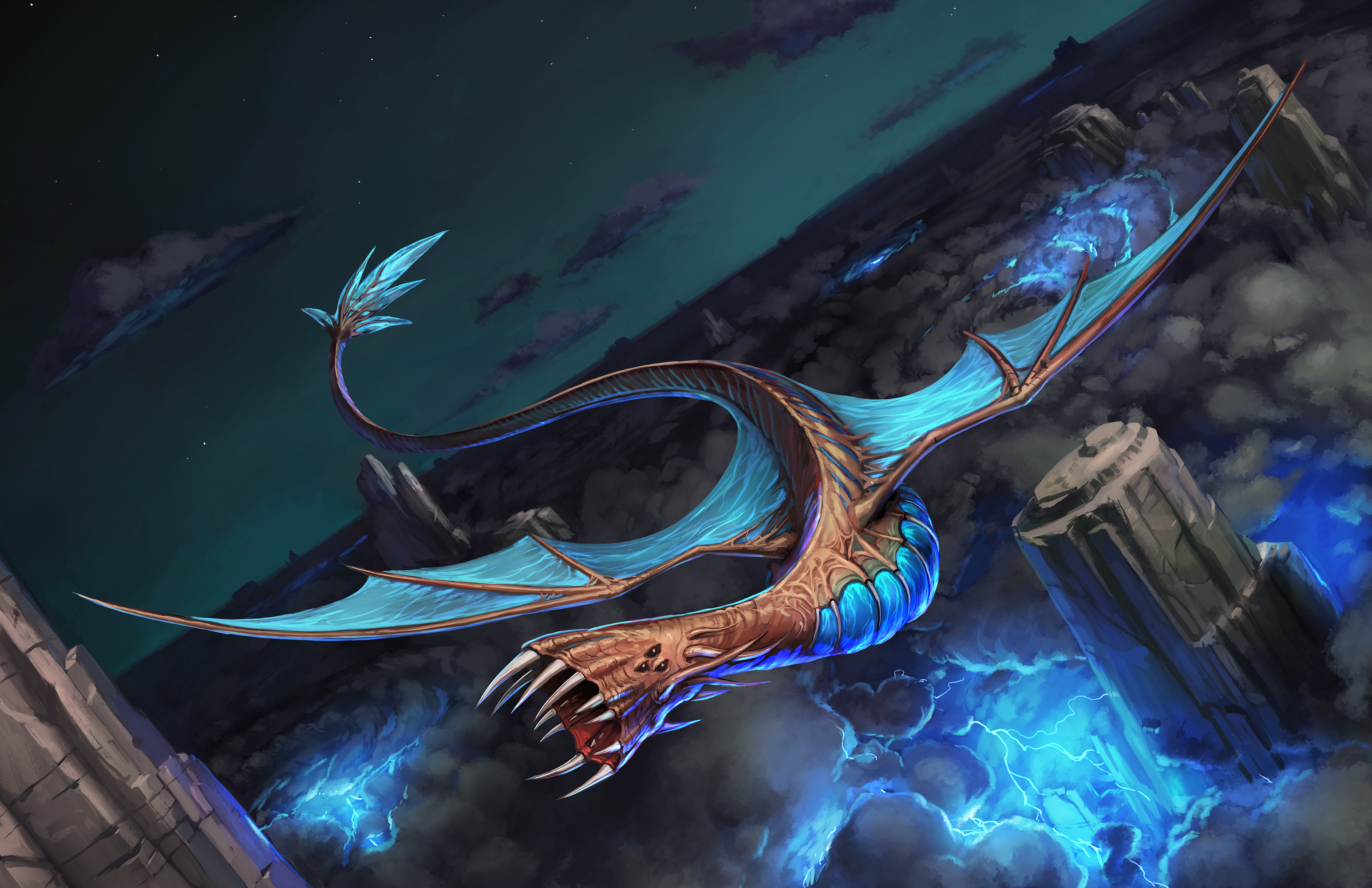 A beautiful egg was dipped into the screaming Void and a monster was hatched.

Some monsters from the unknowable Void slip into the world of Atlas, seeking either prey or power. Others are made by subjecting dragon eggs to the roiling evil of the Void. Annelid was hatched from one of these eggs, becoming something not truly of the Void nor of Atlas.

Annelid is a well-rounded Invoker that utilizes both its breath attack and powerful spell-casts. Annelid’s empowered attack is Invoke: Lightning, which will fire a chain-lightning bolt at the targeted tower and two other random towers. Annelid’s go-to combo is to damage three separate towers with its normal breath attack and then aim Invoke: Lightning to finish off the three towers you just damaged. To further synergize with Annelid’s empowered attack, the dragon has Lightning Storm, which fires 10 damaging lightning bolts at randomly-chosen nearby towers. Lightning Storm won’t be able to destroy an entire island, but the spell should easily allow Annelid to finish off any damaged towers with Invoke: Lightning. Annelid’s main defensive spell is Magic Barrier, which blocks mage tower supershots and briefly makes the dragon invincible. Finally, Annelid has Regenerate, which will heal Annelid for a moderate amount of health over a short duration.

Menace of the Depths 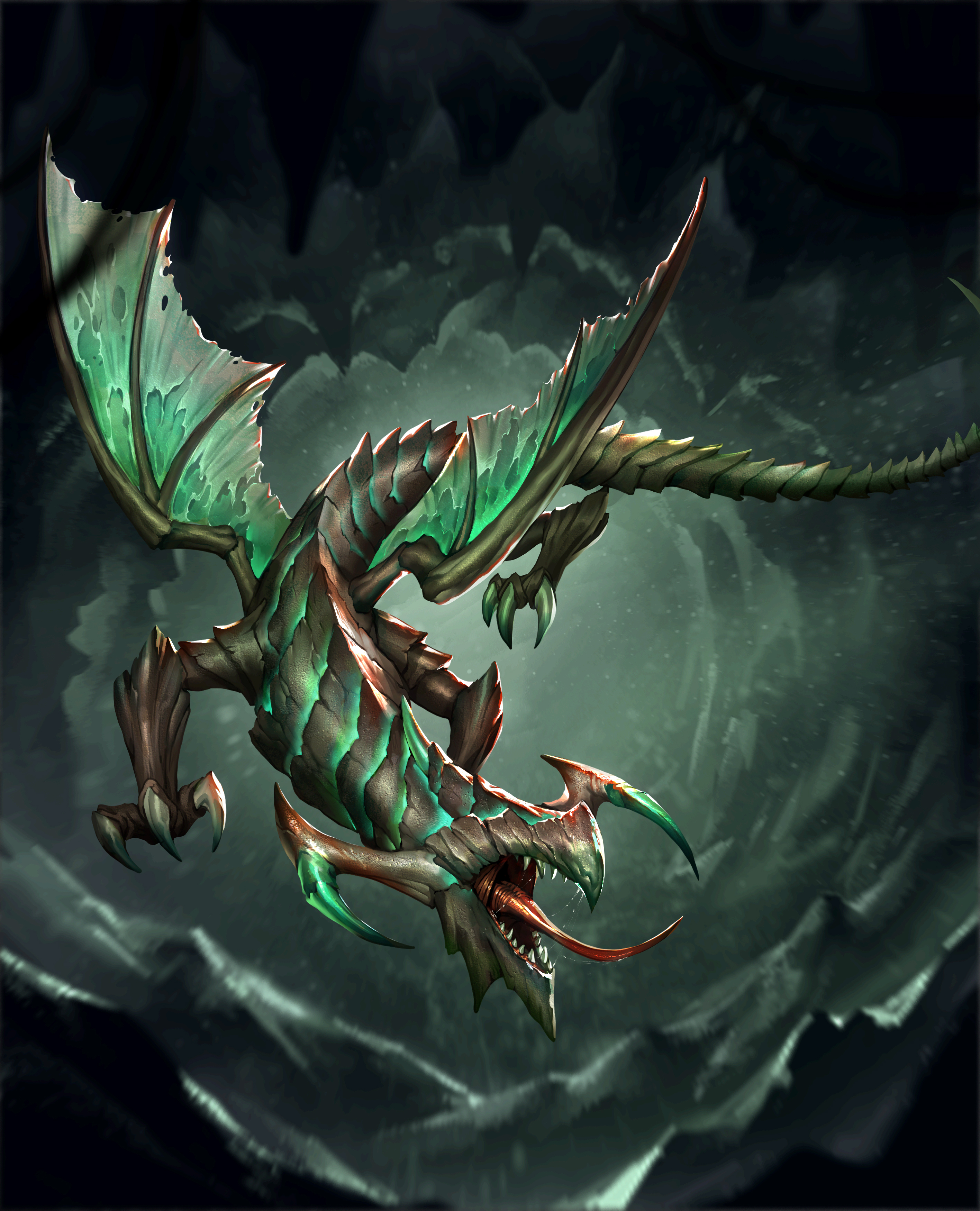 It hunts by sound and its carapace is iron-hard.

The insectile being known as Vexa is one of the most lethal horrors found deep underground. Dwarves remember this dragon well from the total destruction of one of their ancient cities centuries ago, and humans have long forgotten it even existed, until now.

Vexa is a well-rounded sorcerer with a mix of AOE damage, debuffing power, and tankiness. Vexa’s primary offensive spell is Explosive Carapace, which briefly shields the dragon and then explodes for a large amount of damage. Vexa also has Sonic Screech, which will reduce all nearby towers’ damage for the rest of battle. Vexa’s primary defensive skill is Summon Drone, which will summon an AI-controlled warrior dragon with a large amount of health. The drone will not attack or damage any towers. Instead, it will fly ahead of Vexa and absorb incoming damage. Vexa’s drones will likely die throughout the battle, so be sure to resummon them whenever they expire. To help protect against any rage-draining effects, Vexa has Quake, which will freeze any towers in a small target area for a long duration. Vexa fliers can either preemptively freeze mage towers to lock out their supershots or knock the rage-draining projectiles out of the air with skilled timing. 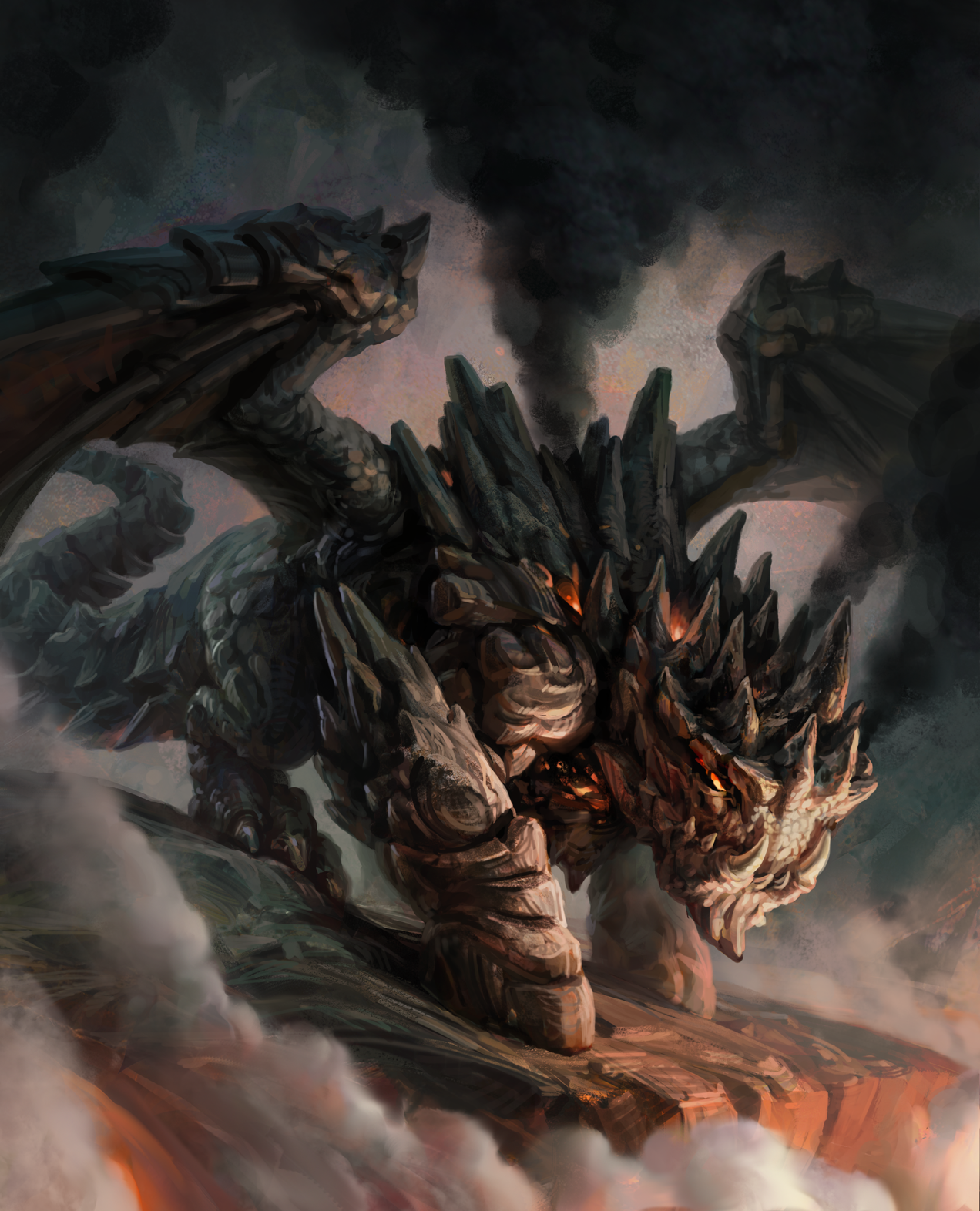 There is extensive, one might even say heated, debate among dragon researchers about the true nature of Caldur. One faction maintains this is an elemental, natural dragon, born of the earth itself. Another group of academics and researchers, headed by the famous Reginald, instead argue that Caldur’s origins and power are not of this world at all.

Caldur is a rage-intensive warrior that relies on frequent spell casts to survive in battle. Caldur’s primary offensive and defensive spell is Magmatic Assault. While toggled on, Caldur spends rage over time to gain increased Breath damage and damage resistance. Caldur’s other offensive spell is Slag Blast, which will fire a deadly projectile at a predetermined tower. Slag Blast costs one rage to cast and refunds one rage on use, so Caldur has a consistent means of single-target destruction provided the dragon isn’t completely rage-drained. To help evade mage tower supershots, Caldur has Smokescreen, which will briefly cloak the dragon and damage nearby towers upon uncloaking. To fuel this constant spell-casting, Caldur has Bloodfury, which nets two rage on cast and heals Caldur whenever a building is destroyed. Caldur is all about rage management. Minimize the active time on Magmatic Assault and only turn it on right before you take a big hit. Smokescreen is Caldur’s only means of avoiding rage drain effects, so always keep one rage in reserve to quickly react to a defender’s supershots. 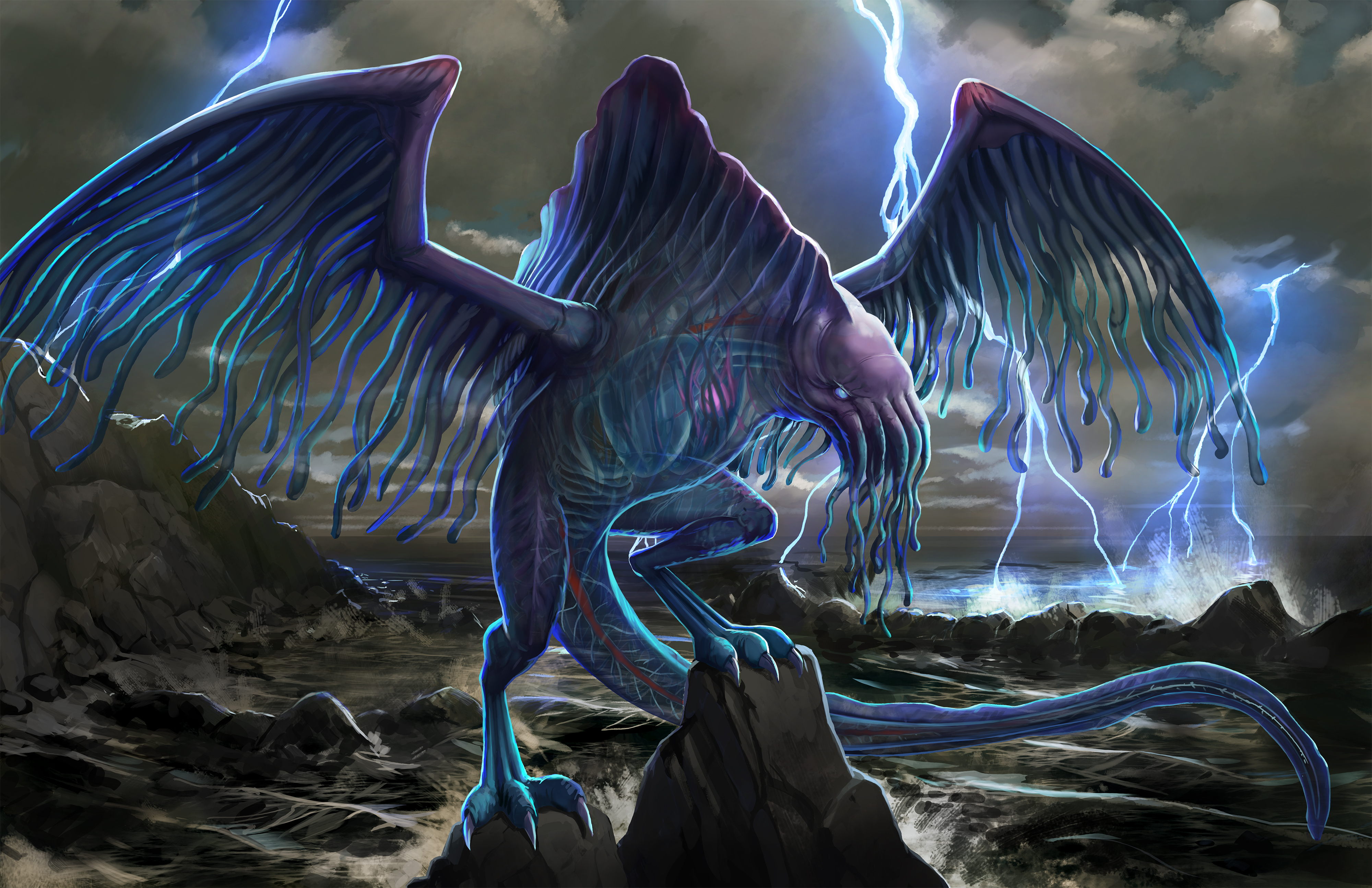 Imbued with a mythic venom, this dragon is nearly invisible when underwater.

A few times every generation or so, there is a Dragon Lord desperate enough to look to the monsters of the deep sea for a solution to the catastrophe they face. Whether their island-kingdom has been ravaged by a long war, or they were overthrown by an usurper, or some other disaster, it takes dire straits indeed to attempt to call upon Caeryss, for the payment may be worse than whatever plagues the Dragon Lord.

Caeryss is an aggressive hunter whose spell kit is built around supporting its breath attack. Caeryss’s primary offensive spell is Envenom, which increases the dragon’s breath damage and causes its attacks to poison towers. To go alongside the breath damage buff, Caeryss has Reconstitute, which instantly reloads a portion of the dragon’s ammo and restores health on cast. Instead of a resist, Caeryss has the Undertow passive, which empowers the dragon’s breath attack to cause towers to take increased damage. Undertow’s bonus damage will stack with the bonus breath damage from Envenom and increase any poison damage as well. Caeryss’s only defensive spell is Flash, which will dodge all non-beam attacks for a short duration. Caeryss’s success lies in predicting the dragon’s damage output. Between two breath-enhancing effects and a poison DoT, Caeryss will shred through towers. Try to learn how many breaths attacks are needed to destroy towers in various situations, so any attack inputs can easily become “fire and forget.” 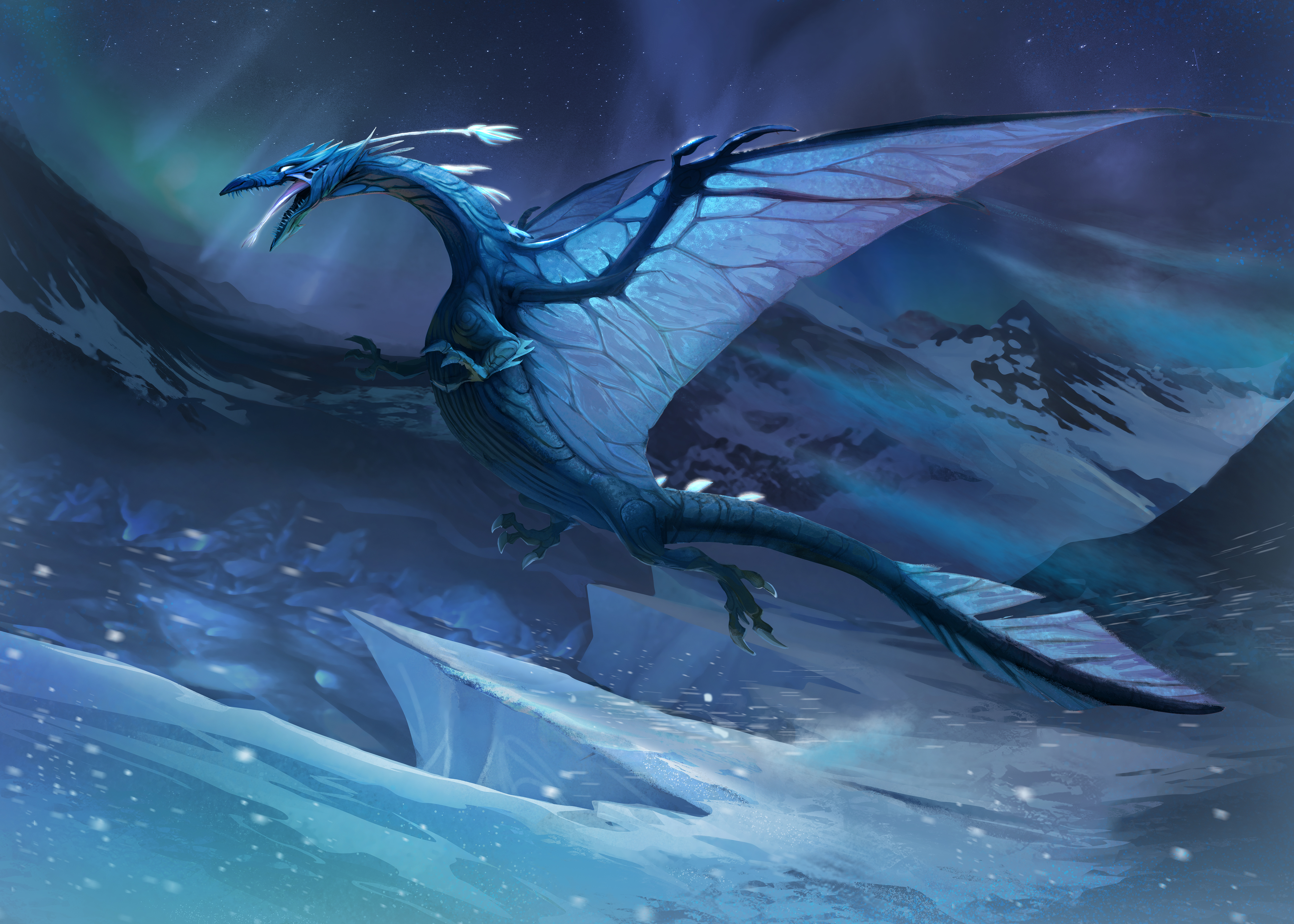 Delicate, web-like wings let this dragon gracefully and silently soar in the clouds.

Glossia has long been worshipped by a succession of cults, who use crystals and strange, colorful murals in their rituals. It is unknown whether this worship is well-received by Glossia or done entirely in vain.

Glossia is a versatile sorcerer that can adapt to different situations. Glossia’s passive is Spellweaving, which will reward Glossia with a new spell whenever the dragon destroys a tower. Glossia can obtain one of three different spells with Spellweaving. The first is Crystal Tomb, which will freeze a target tower and give Glossia a shield. The next is Prismatic Lights, which will make Glossia briefly invincible and then apply healing marks to nearby towers. Finally, Glossia can obtain Reflection, which will briefly reflect all incoming projectiles back at the attacking towers. Note that Glossia must cast any Spellweaving spell before a new one can be acquired. To easily trigger Spellweaving, Glossia has Fracture, which will destroy a target tower of roughly equal level. Spellweaving has no internal cooldown, so Glossia can chain different spells together as frequently as Fracture can be cast. Glossia’s final spell is Crystalize, which will damage and freeze all nearby towers, and cause them to take increased damage. Crystalize can only be used once, however, so it is not a consistent means of defense.

Conquer them all with the latest Eldritch Legendaries Dragons! Which of these powerful new drakes will join your team? Head over to the official War Dragons Forums to discuss with the War Dragons community!