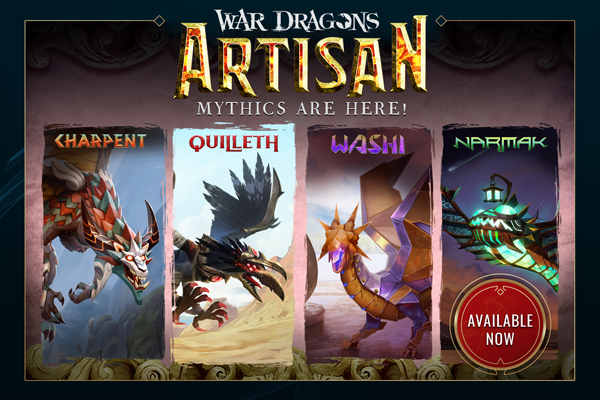 The Artisan Tier has arrived and with it are the winds of change. Artisans may seem like second class citizens in Atlas, where war is constantly waged. But the Artisan class brings beauty to a world, providing that necessary balance for the denizens of Atlas to find something worth fighting for, something worth defending. But Artisans are not only capable of creating beauty… but also beautiful destruction. Why could anyone else have conceived of and created the first Evolution Dragons?

Before we get started, [read this post on the War Dragons Forums](https://forums.wardragons.com/t/artisan-tier-breeding-pairs/144197/125) to learn more about how to Breed Artisan Tier dragons.

These 4 Dragons will release at a cost of 1,875 Egg Fragments per Dragon. Each Dragon will be able to be incubated at incubator Level 19 and Player Level 520. Tier 19 Dragons can be maxed out as Legendary at Dragon Level 40, Dragons Den Level 145, and player Level 535.

Note: the numbers above are for the Legendary evolution form of the dragon, we will release the Mythic evolution numbers later.

Lineage Tiers have been in a difficult state for sometime, offering little value for players while taking a lot of energy to develop and design. Our hope with these new changes is to give players more meaningful choices around Lineage Dragon breeding, reduce the development of less interesting content, and simplify breeding paths going forward.

There’s A LOT to go over so here’s the tldr; for the busy Dragon Lords out there:

Lineage Legendaries largely end up being used as “breeding fodder” for a given tier. It feels bad for a player to spend Breeding Tokens on a dragon that isn’t as good as a Seasonal Dragon; on the other hand, it feels bad for us to make Dragons that players don’t want to/can’t justify flying. It’s a lose/lose situation!

As a result, we will be removing all Legendary Dragons from future tiers. In their place, we will release 4x Evolving Dragons (one of each class) per Lineage Tier. These new Lineage Evolvers will release at the same time Lineage Legendaries would normally release, but they will be level capped to Level 40 when they are released. Levels 41-50 will be unlocked later in the life of the tier, during the time when you would typically expect Lineage Mythics to be released. The overall expected increase in power over a tier isn’t changing, but the Lineage Dragons that represent these power increases will now be the same set for the whole life of the Tier.

In order to facilitate more interesting choices, we will also be rolling out the 2 following changes:

From Tier 19 onwards, Builder Huts will no longer require Research Eggs to upgrade. Instead of using Research Eggs as a proxy for Breeding progress, we will use achievements to ensure players are breeding Dragons (e.g. Builder Hut requires you breed 1/2/3/4 Tier N Lineage Mythics to upgrade).

In the past, players were locked into a Lineage Mythic path with a high cost for switching to a different one. On top of this, the Research Egg tax is a must-pay for all players with Builder Hut upgrades. Neither of these scenarios are good for players.

By repurposing Research Eggs currently required in the Builder Hut for Mythic Dragon level upgrades, players will get to make a choice of which Dragon they like and want to further invest in. The overall required costs aren’t changing, but how players pay those costs will lead to more interesting decision making.

Before, players needed to forward breed 3x Legendary Dragons and 1x Mythic Dragon per tier in order to move onto the next tier. This led to a minimum Breeding cost per tier of roughly 1.6M. With this new change, players will be required to breed all 4x Evolving Dragons to move onto the next tier but each Evolving Dragon will have its Breeding Cost reduced to be in-line with the 1.6M cost paid under the current system.

Every Artisan breeding pair backbreeds an Arcanum Mythic, not a Legendary.

Two Artisan dragons cannot breed together, you need to get all of the Arcanum Mythics.

Because all of the pairs backbreed Mythics, you will have the next Arcanum Mythic before you even finish the Artisan egg.

To backbreed for research eggs, the Narmak route breeds legendary eggs, which is why it’s the “final step.” 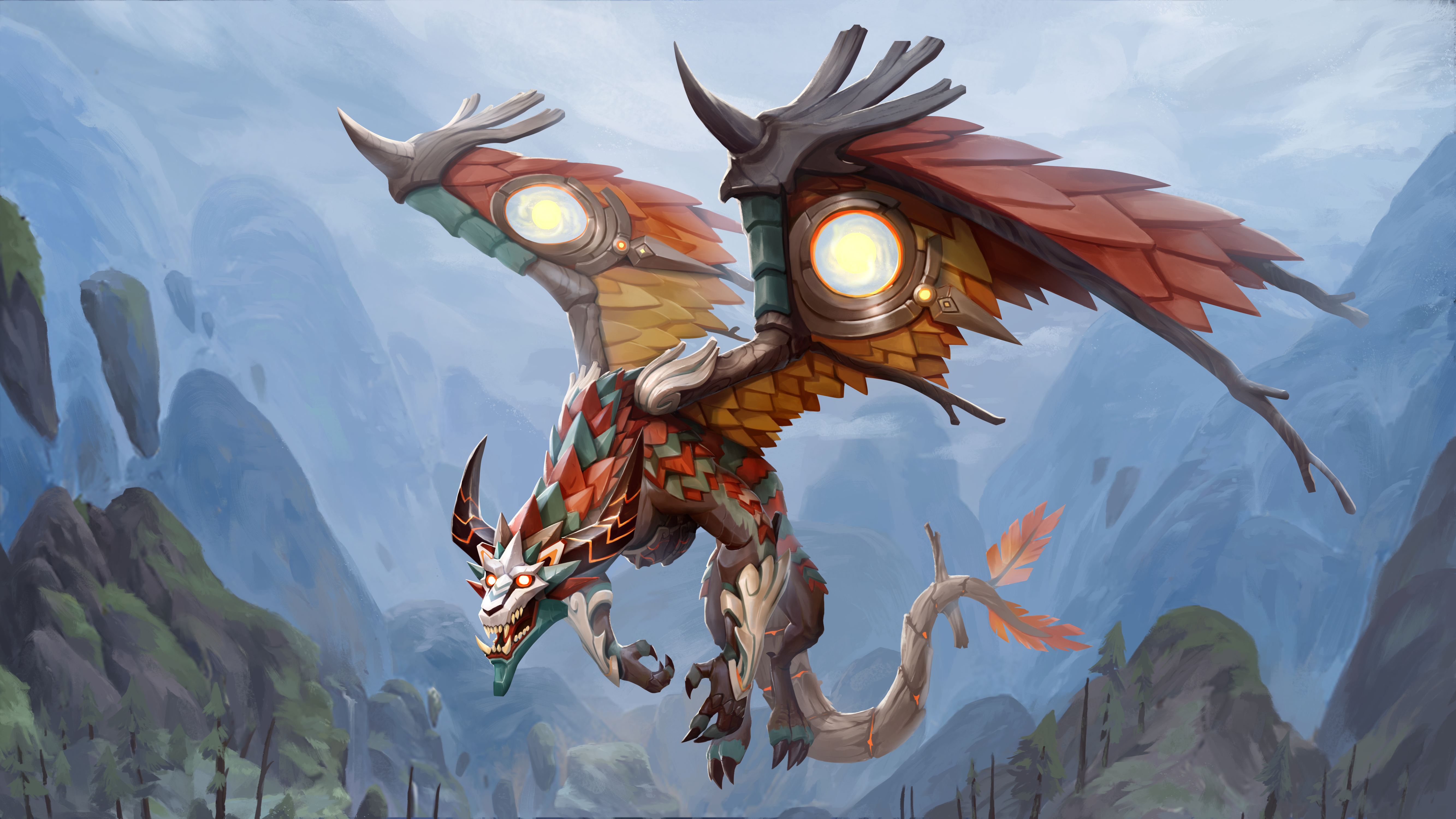 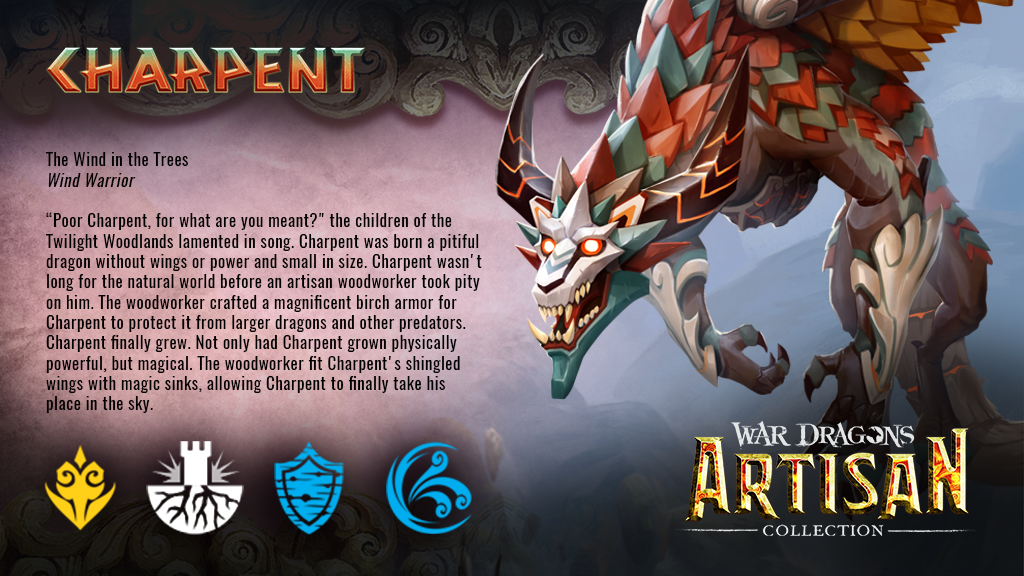 Freezes all nearby towers for (4) seconds and damages them for (8)% of dragon's modified HP and causes them to take (50)% increased damage.

Charpent is a Wind Warrior with a unique and powerful passive. Through harnessing the unbridled energy in natural materials, Charpent gained access to its passive, Raw Stock. Raw stock grants Charpent’s flamethrower breath attack increased damage and speed at all times. When attacking, Charpent relies heavily on Root Caller to deal damage to all nearby buildings and disable them with grasping vines. While the buildings are frozen, Charpent can use its powerful flamethrower to burn down key targets.

Charpent wants to focus specifically on Blue Mage towers during this time. Once those are out of the way, it will unlock its last two powerful spells: Winds of the North and Birch Barrier. Winds of the North further increases the power of Charpent’s flamethrower breath, causing it to freeze any tower damaged by its breath for the duration. Birch Barrier is the main defense of the dragon, completely negaing all damage from towers and supershots while it’s active.

With careful target selection and good use of its offenses and Birch Barrier, Charpent will be a natural force to be reckoned with. 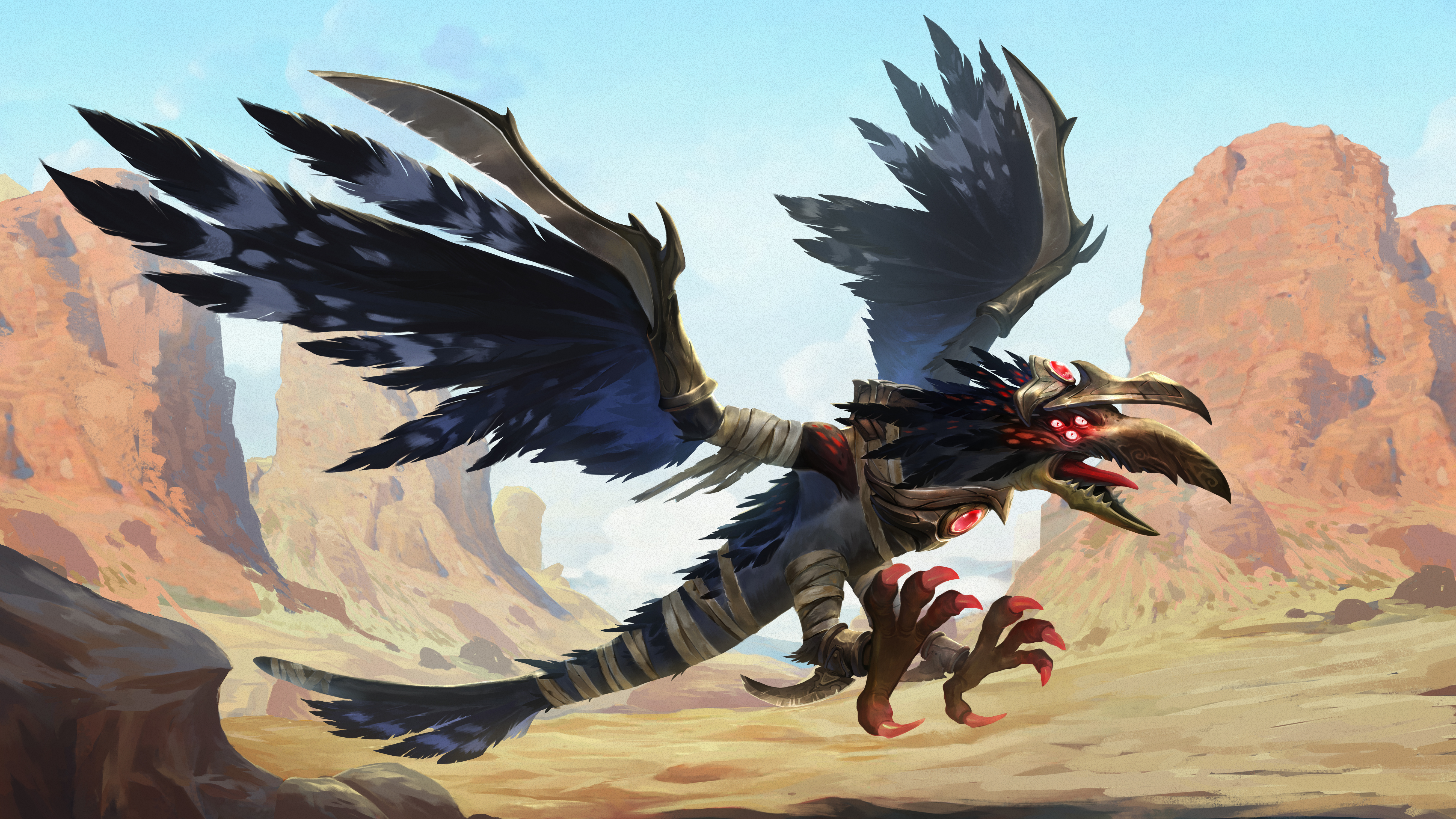 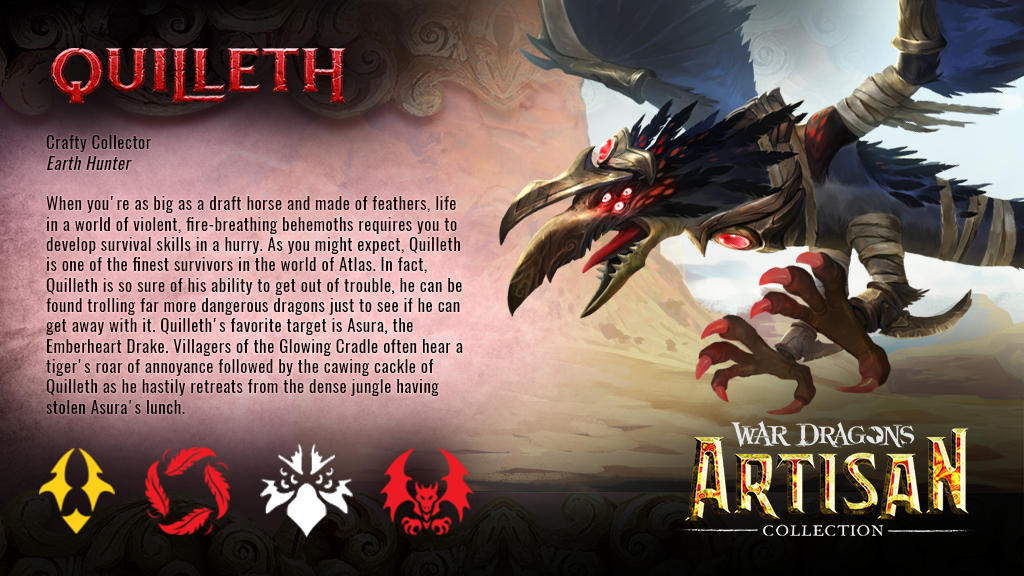 Dragon flies at (25)% of it's base speed, reloads all ammo and dodges all non-beam attacks for (4) seconds. Damages nearby towers for (6)% of dragon's modified HP each second.

Dragon cloaks for (3) seconds and reloads all ammo. While cloaked, dragon flies at (25)% of normal speed. After cloak duration, damages nearby buildings for (10)% of dragon's modified HP. Damage doesn't remove tower-disabling effects.

Quilleth is a crafty hunter dragon that shines under the command of Dragon Lords who are skilled in ammo management. Injuries from a previous battle cause Quilleth to suffer reduced ammo regeneration speed. However, its passive ability, Scrappy, grants it double fireball breath damage in exchange. This powerful passive is the main weapon in Quilleth’s arsenal, with its spells mainly focusing on instant ammo refills to bypass its slow natural ammo regeneration speed. Feather Storm dodges all incoming projectiles and deals damage to surrounding towers. Casting Feather Storm also immediately refills all of Quilleth’s ammo, allowing for an extended barrage of fireballs.

When caught in a tough spot Quilleth has two defensive spells at its disposal. It can cast Inkblot to cloak in a mist of ink and become untargetable. While hidden, Quilleth will fully reload its ammo, and at the end of the duration, Quilleth explodes from the ink, damaging nearby towers. Inkblot is a flexible spell that can be utilized for the ammo refill or for the safety of the cloak, depending on the situation.

The other option is to use Raptor Dive precisely when a powerful attack is about to strike, and shrug it off through the brief invincibility effect. In addition to the invincibility, Raptor Dive deals damage to all surrounding towers while also refilling Quilleth’s health and rage resources. This spell is incredibly powerful but requires perfect timing to have the greatest impact on the battle. If cast early for just one of it’s benefits, Quilleth may find it self in need of the others not long after. 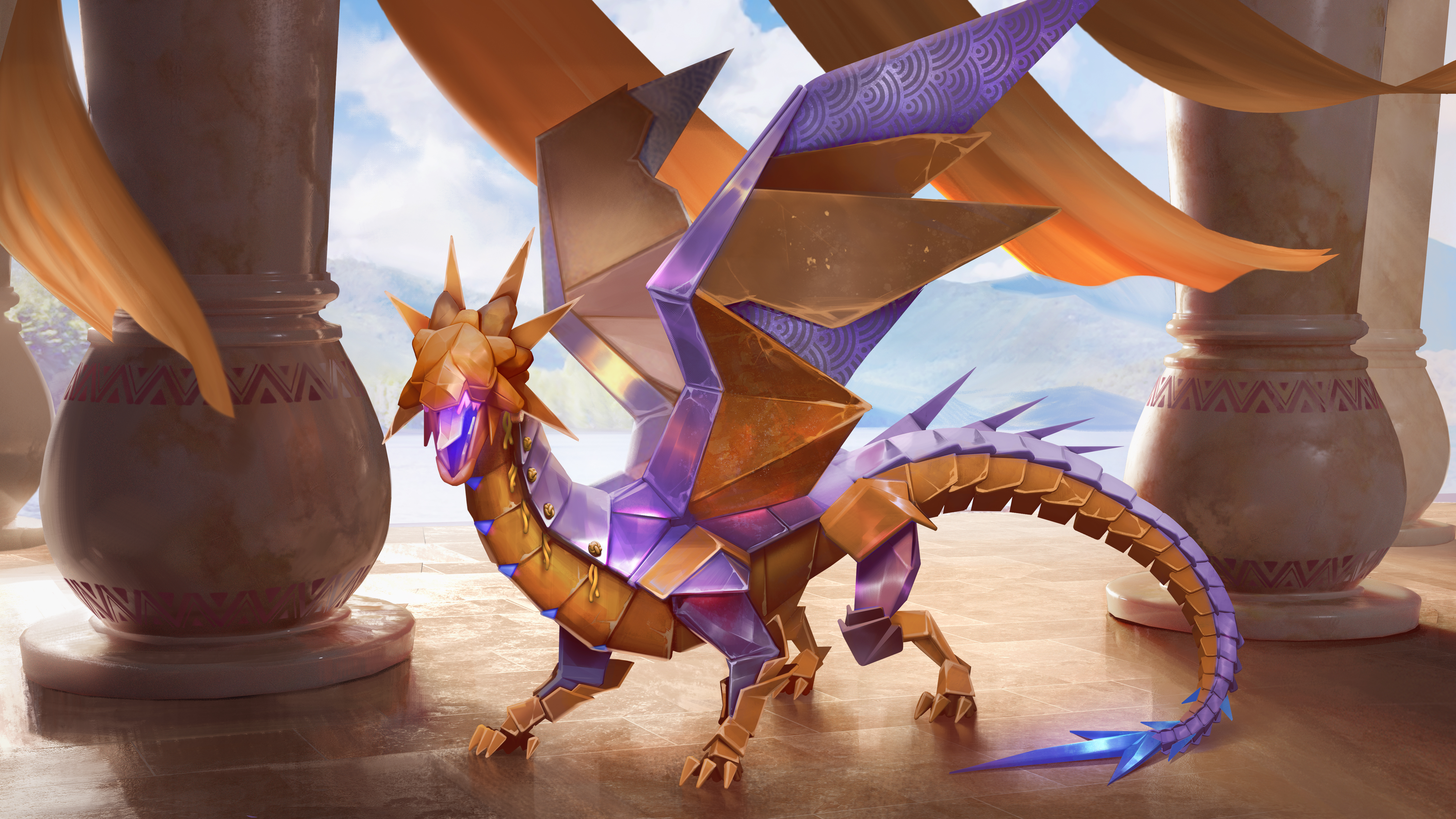 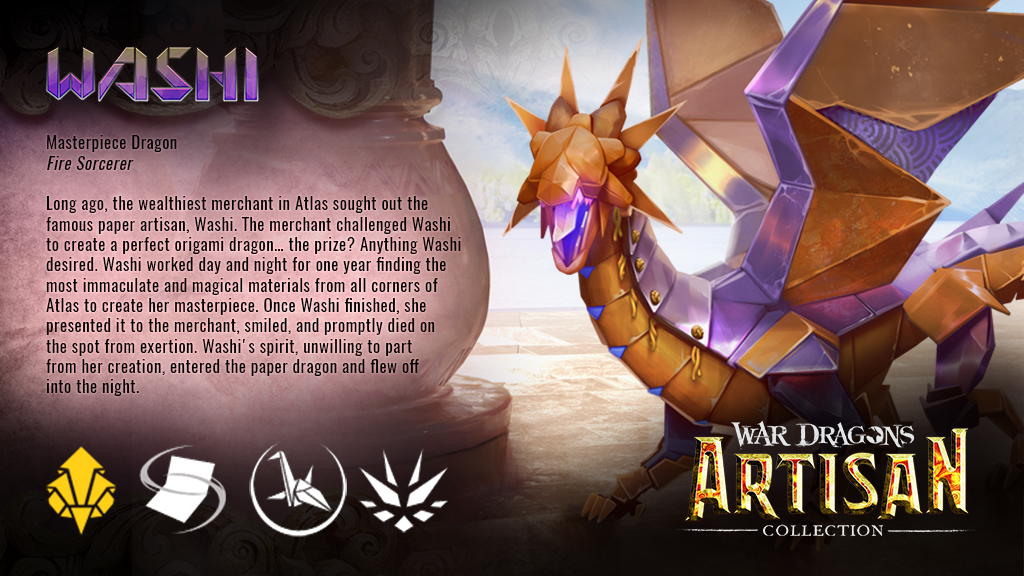 MASTERPIECE - Passive | Yellow Increase base breath damage by (500)% and increases maximum targets to (5).

For high priority target removal, Washi can cast Brainstorm, a spell that deals explosive damage to the first target it strikes, and then bounces to two additional towers for the same damage. To ensure that Brainstorm destroys anything it touches, try combining it with Washis third spell, Artful Tomb. Any towers in the large targeted area of Artful Tomb will take massively increased damage for the rest of the battle.

After weakening the tower's defenses with Artful Tomb, Washi’s Brainstorm is sure to kill, and with a little luck, it might bounce to another weakened tower as well. Towers affected by Artful Tomb take increased damage from all sources, so the dragons Masterpiece empowered Volleys will also become far more threatening. Artful Tomb can be cast a second time and will grant Washi one rage, however the second cast has a much smaller area of effect and does not cause it’s targets to take increased damage. If a tower already affected by Artful Tomb is hit by the spell again, it will be instantly destroyed.

For defenses Washi must rely solely on Magic Paper. Magic Paper freezes all nearby towers, blasting any mid-air projectiles from the sky. Control the battlefield with Washi and terrorize your enemies with unending volleys of fire. 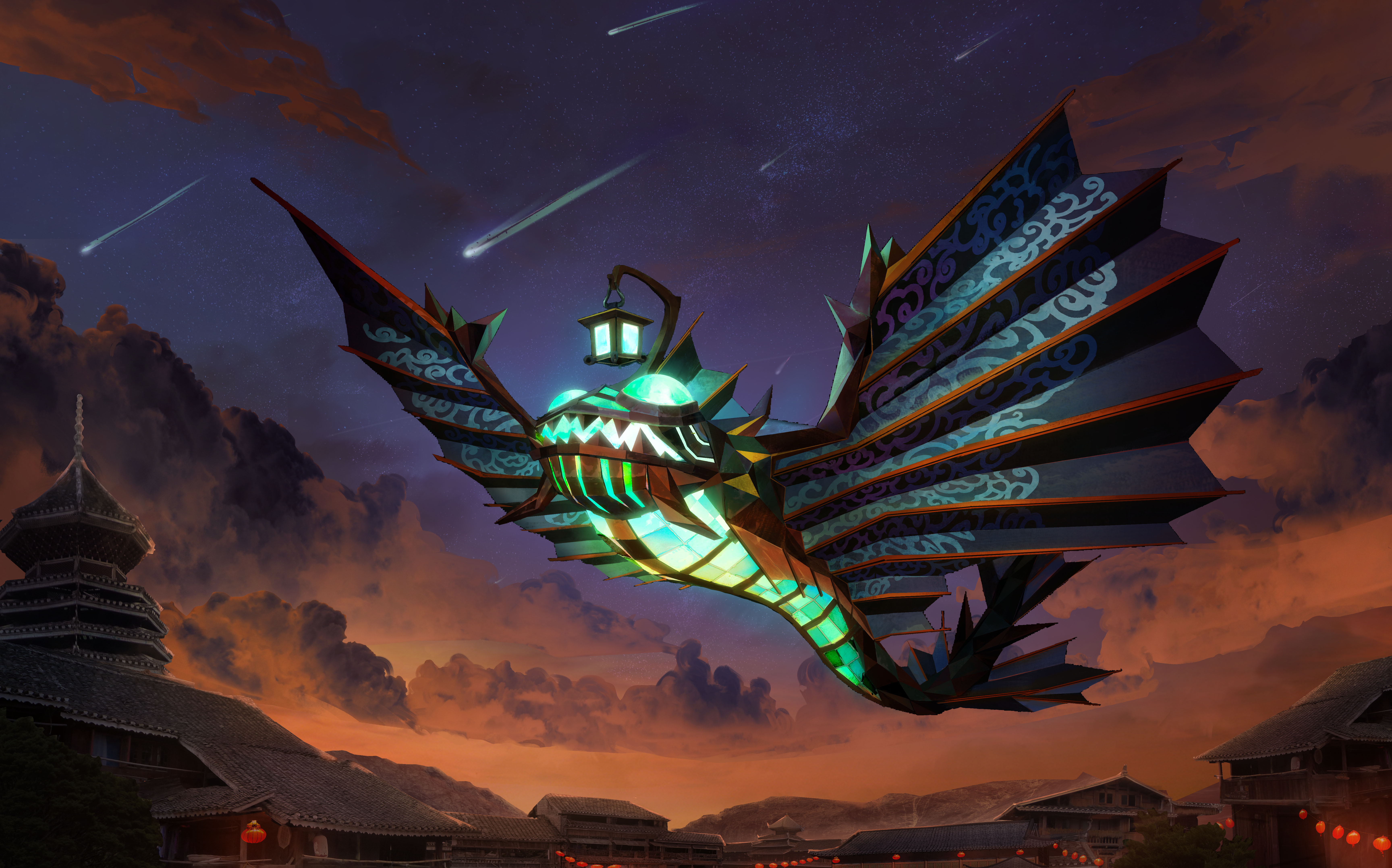 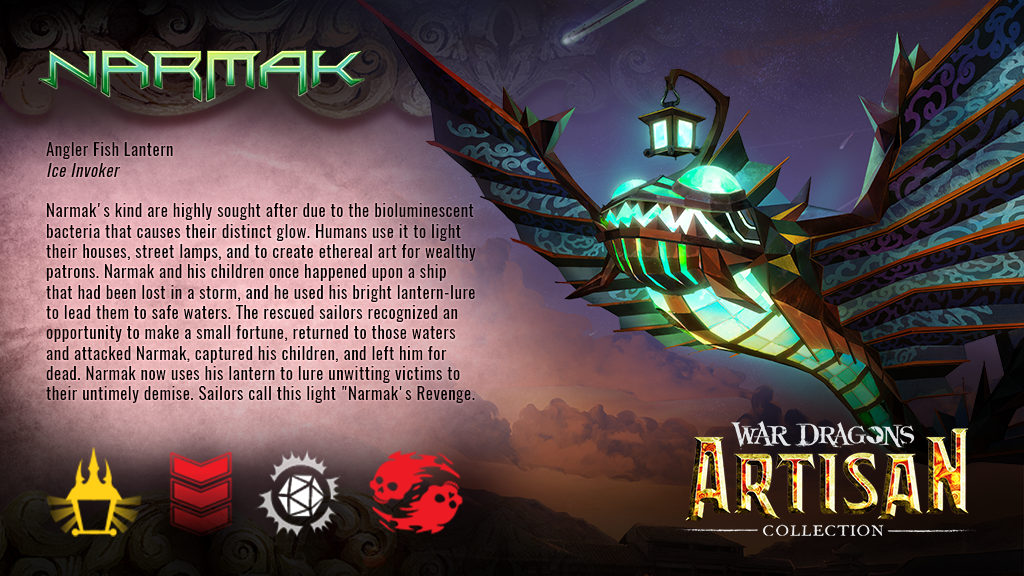 Dragon deals (8%) of HP as damage to all towers in range and reduces their damage output by (70%).

Damages a target tower for (25)% of dragon's modified HP and freezes it for (5) seconds.

Narmak is a rapid fire single target eliminating Invoker. Narmak is able to recharge it’s ammo much faster than any other Invoker dragon.

With such a short reload time, it’s able to use Invoke: Lantern Ray to systematically remove enemy towers, and pick their bases clean. Lure the Witless is the main spell in Narmak’s arsenal. When cast, Narmak cloaks under the veil of the deepest depths, staying submerged and untargetable for a length of time. Lure the Witless has a low cooldown, allowing the dragon to stay out of harm's way almost every time it needs to reload. If Narmak spends the full duration of Lure the Witless submerged, he will explode out of the water and damage all nearby enemies.

Its other two spells, Fading Light and Sunless Depths both help narmak weaken the enemy base. Fading Light is a single projectile that freezes and heavily damages the target tower. While casting Sunless Depths causes Narmak to unleash a terrifying roar that reduces the damage all nearby builds will deal to him for the rest of the battle.