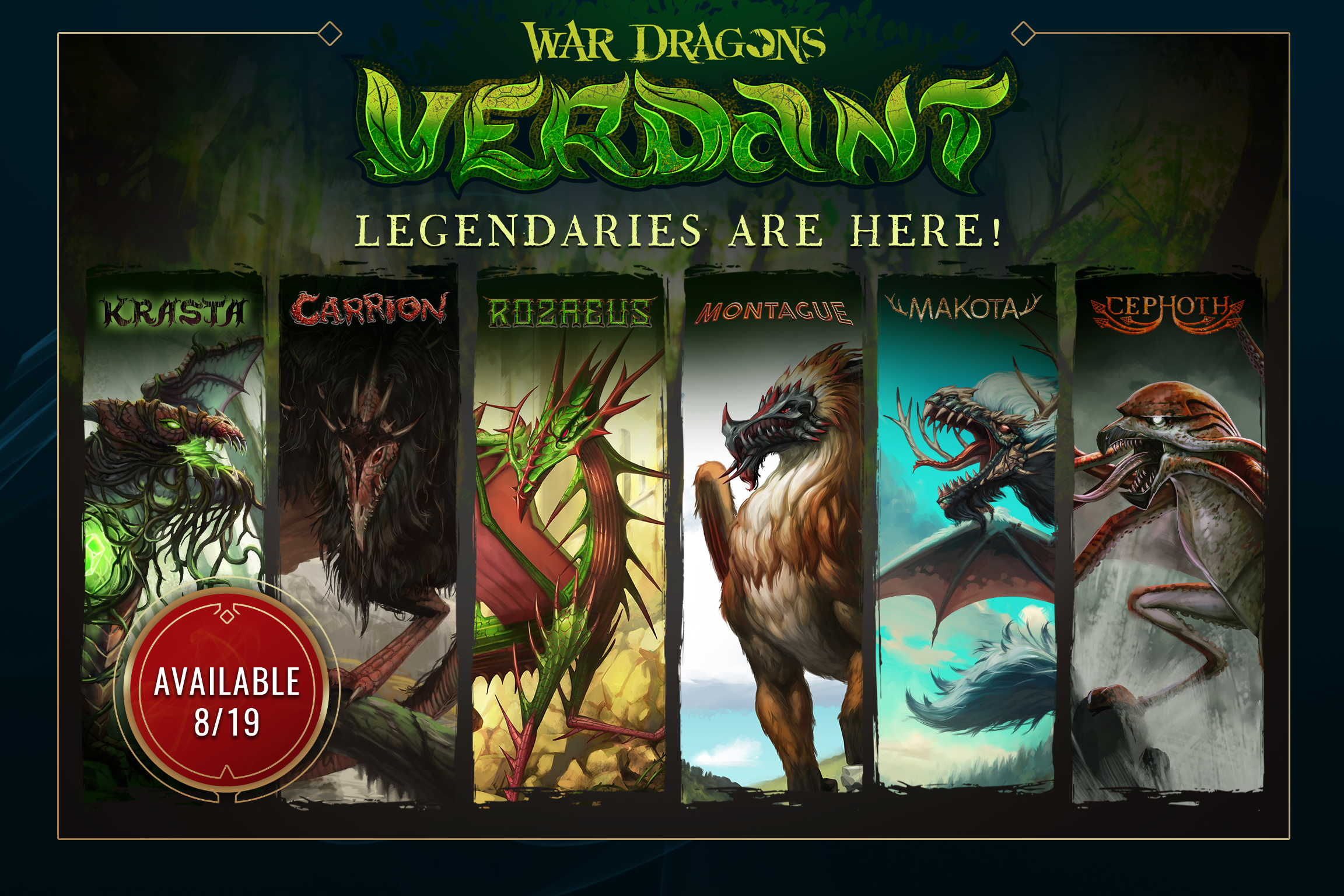 The Legendary Verdant Dragons arrive this week in War Dragons! The lure of lush, green foliage offers up a seductive refuge from the exposed lands around, but at a high cost. Pay attention to the critters of the underbrush… when they scurry, you should scurry, too. Are you ready to succumb to the wild woods with Krasta, Carrion, Rozaeus, Montague, Makota, and Cephoth, or will you harness them as your own?

These 6 dragons will release at a cost of 1,500 Egg Shards per dragon. Each dragon will be able to be incubated at incubator level 17 and player level 495. The dragons can be experted at Dragon Level 40, Dragons Den level 125, and player level 497 (which won’t be available at launch).

With the release of the Verdant Tier, we’ll be making some updates to Tier-based Discounting in order to smooth out the costs to progress from Red to Verdant Tier. Just like previous tier releases, Breeding Token, Food, Experience, and incubation time costs will also be reduced proportionally. However, as before, the eggs and time required for research will not be reduced.

The following discounts will go into effect: 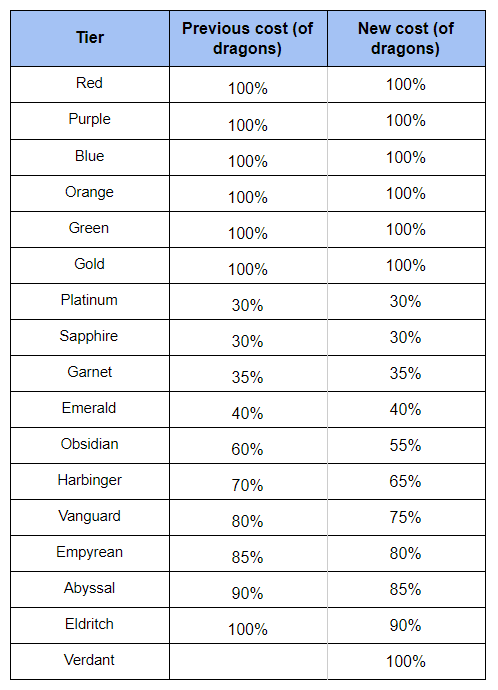 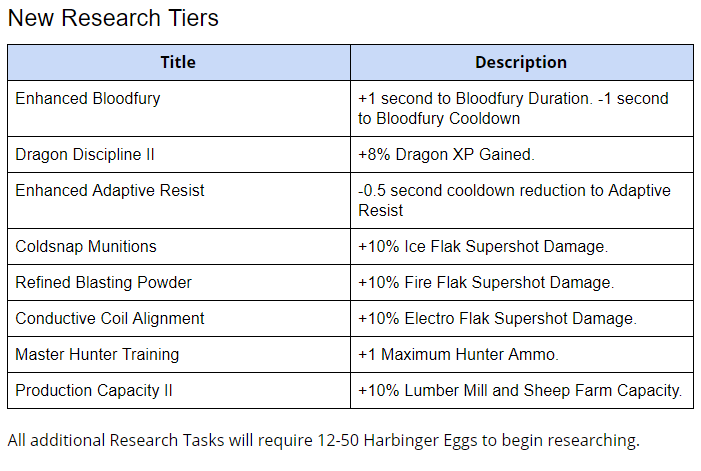 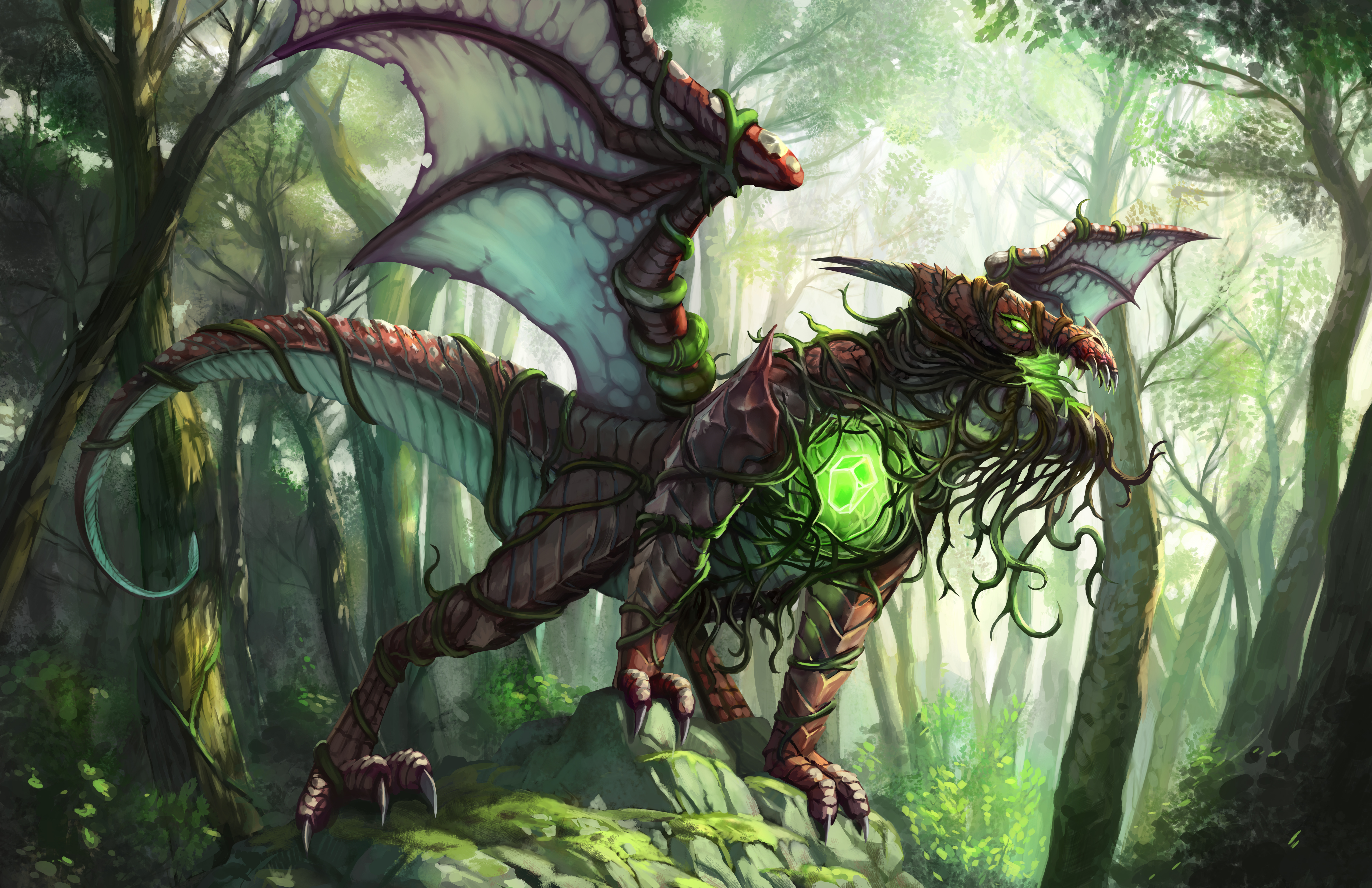 Vines erupt from the mysterious crystalline heart of this dragon.

Closer to a primal spirit than a living, breathing dragon, Krasta is as old as the forest, as old as the very idea of a forest. The glowing power of nature pulses out from the heart nestled in the center of Krasta’s chest, and it is entirely unknown what would happen if that glow should be snuffed out.

Krasta is a spell-intensive warrior with a mix of offensive, defensive, and utility spells.

Krasta’s main offensive spell is Nature’s Wrath, which fires a high-damage projectile at a predetermined tower, prioritizing Blue Mage towers and Crystal Howitzers. Nature’s Wrath is Krasta’s most reliable means to destroy towers, and should be cast as often as possible. Once the Blue Mage Tower is down, Krasta can cast Infusion, which restores rage on cast and causes Krasta to heal whenever they destroy a tower. Looping Nature’s Wrath and Infusion is a strong strategy that provides a good mix of healing and tower destruction.

One of Krasta’s defensive spells is Entangle, which damages, debuffs, freezes all nearby towers. The frozen towers take increased damage from all sources, and the spell also destroys all mid-air projectiles. Krasta is heavily reliant on rage, and using Entangle to dodge Mage Tower supershots is essential to the dragon’s survival. 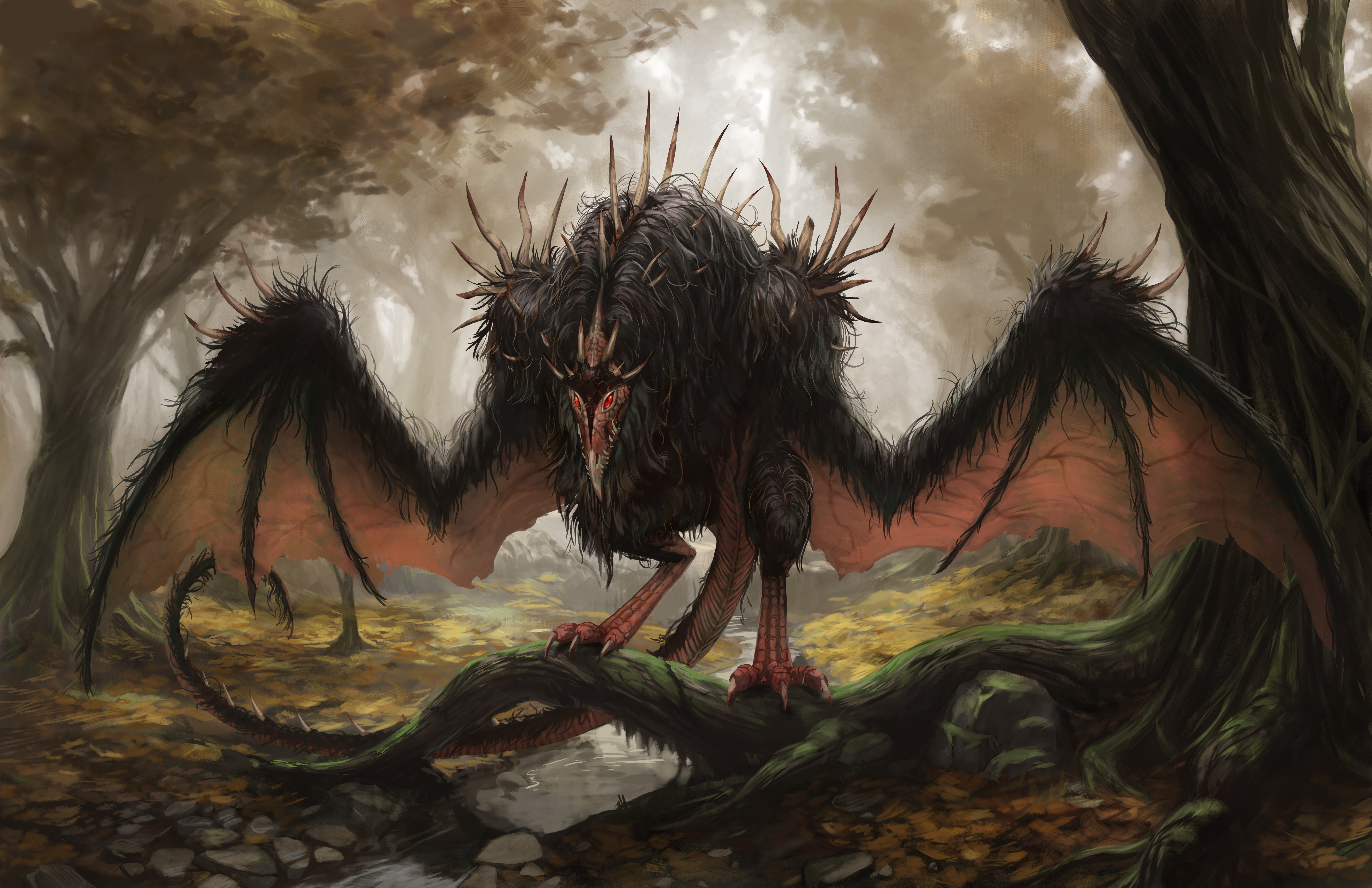 The most learned dragon researchers and scholars have long been mystified by the family of dragons known as Carrion. With their great size and power, they should be apex predators like most other dragons. Instead, however, Carrions are scavengers: cautious, methodical creatures who will only eat prey they are sure are quite dead, and who will only attack to defend themselves. Much ink has been spilled and many treatises have been written on why this could be, and the prevailing theory in recent years is that there is, or was, an apex predator in the shadowed woods where Carrions lurk, which these dragons still step very carefully around.

Carrion is a surgical hunter who specializes in precise attacks. Carrion’s main offensive spell is Gloom Bolt, which heavily damages all towers in a small target area. Red and Blue Mage towers are both high priority targets, as Carrion’s sustain and survivability lie in its colored spells.

Carrion’s main sustain tool is Hunter’s Mark, which marks a targeted tower. If that tower is destroyed, Carrion will restore a moderate amount of health and rage. Gloom Bolt is an excellent way to trigger the mark, allowing Carrion to frequently heal without losing any rage.

Carrion’s main defensive spell is Lurk, which cloaks the dragon for a short duration. Upon uncloaking, Carrion damages nearby towers and gains increased breath damage for a short time. Lurk can be used to dodge dangerous projectiles, such as Mage Tower supershots, while also providing the dragon with a powerful damage boost.

Carrion’s final spell is Engorge, which heals Carrion for a small amount and grants the dragon increased ammo generation for a short time. While Engorge can heal Carrion, the spell is most effectively used offensively, giving the dragon an abundance of ammo to burn through towers. Engorge can also be combined with Lurk’s bonus breath damage for even more destruction. 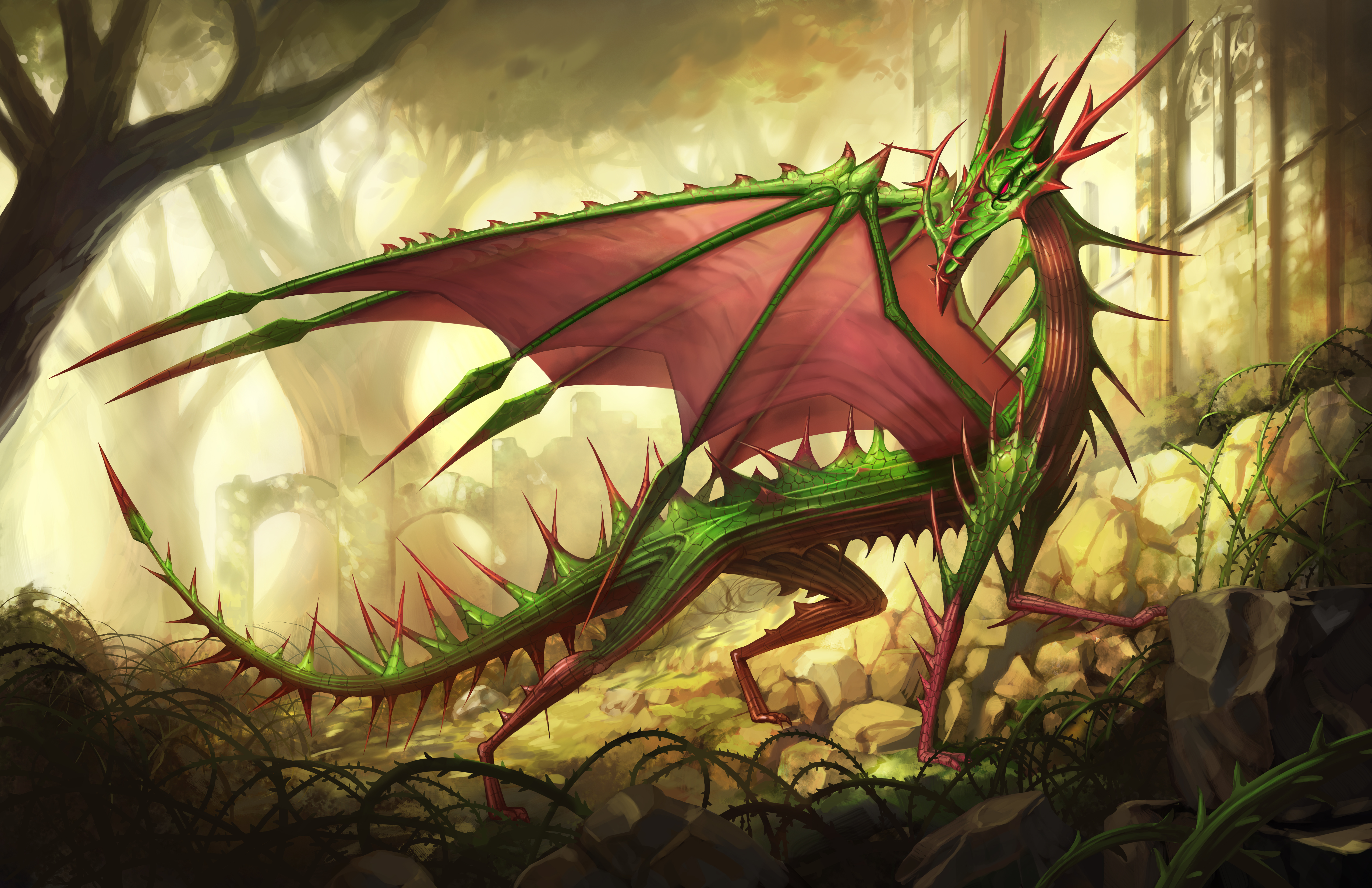 Burning venom hides within the thorns of this dragon's plant-like carapace.

Rare and elusive, Rozaeus dragons have been sighted in many of the far-flung forests of Atlas. From the snowy stretches of pine in the southern Frigid Narrows to the squelching copses of the eastern Wailing Marches, people have seen, every few years, the thorny silhouette of a Rozaeus off in the distance. And it is distance one must keep from these fiery, dangerous dragons.

Rozaeus is a well-rounded sorcerer that excels at both cracking open and cleaning up bases.

Rozaeus’s main offensive spell is Bramblethorn, which heavily damages all towers in a small target area. Bramblethorn has no cooldown, and can be repeatedly cast as long as Rozaeus has enough rage. While it may be tempting to spam the spell, Bramblethorn is essential for enabling Rozaeus’s defensive, colored spells, and mage towers are the highest priority threats.

While Bramblethorn and Fiery Thicket may be explosive and flashy, Rozaeus’s most important spell is Blood Rose, which drains a portion of the dragon’s health and converts it into rage. Rozaeus wants to cast Bramblethorn as often as possible, and Blood Rose can be frequently cast to ensure the dragon has enough rage to do so.

To help mitigate Blood Rose’s health cost, Rozaeus has Super Rejuvenate, which heals the dragon for a moderate amount over a short duration. Target prioritization with Bramblethorn is extremely important. Rozaeus’s rage engine and healing are blocked by Blue Mage towers, whereas the dragon’s AOE destruction is blocked by Red Mage towers. Think about which aspect of the dragon’s spell kit is most important at any given moment, and aim accordingly. 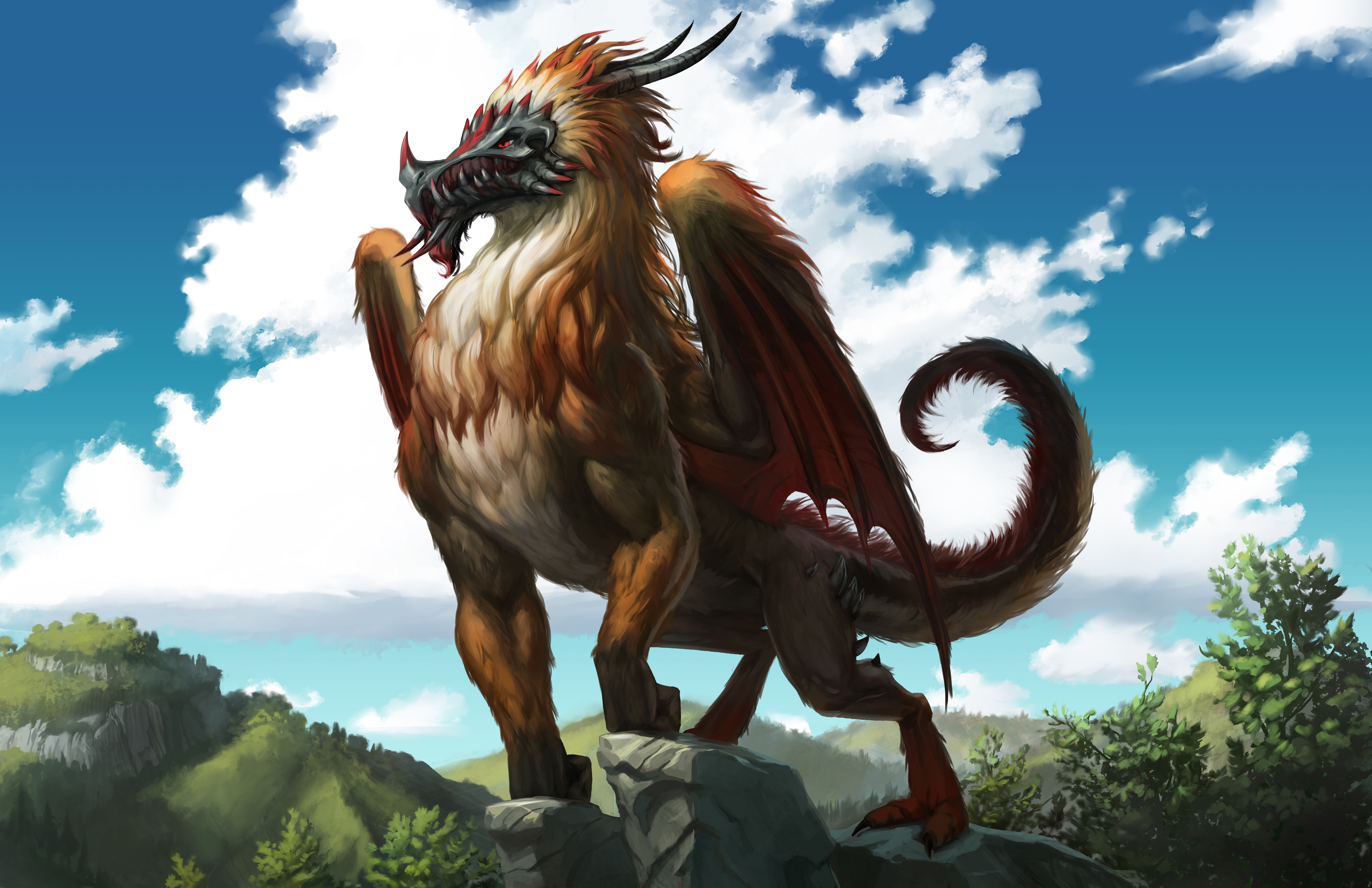 The season of fall arrives in the form of this savage, proud dragon.

It is with pride that Montague watches over its chosen territory. It is with pride that Montague does anything, really. Deals and offerings made to this dragon are done with averted eyes and bowed posture, for it will brook no disrespect or attitude. Presumably this pride comes from Montague’s important ties to the very season of autumn, but it could also be from the impressive plumage.

Montague is an offensive warrior whose spells synergize with its breath attack.

Montague’s main spell is Shield of Savagery, which blocks all incoming damage for a short duration. When the shield expires, Montague gains increased breath damage based on how much damage was blocked. When cast at the right moment, Shield of Savagery can provide a massive boost to Montague’s breath damage, allowing the dragon to quickly destroy towers, even through defender hammers. Montague’s breath damage is further enhanced by the dragon’s passive: Primal Strength. Every several seconds, Montague will restore a small amount of health and gain increased breath damage. This damage boost will stack with itself, up to a large cap, and it can also stack with Shield of Savagery’s boost, allowing for an absurdly powerful breath attack.

Montague’s other offensive spell is Boulder Smash, which damages and freezes all towers in the target area. Boulder Smash can be used to disrupt mid-air Mage Tower supershots and lock down threatening towers when Shield of Savagery is on cooldown.

Montague’s final spell is Adaptive Flak Resist, which swaps the dragon’s active resist and restores a small amount of rage with each cast. Montague’s passive naturally pushes the dragon towards attacking longer bases in which the damage boost can ramp up. As a result, Montague should focus on survival when attacking the opening islands and destruction on the back half. Boulder Smash and Adaptive Flak Resist can mitigate a large amount of damage, but these spells also reduce the amount of damage that Shield of Savagery can block, and Montague should be careful when spell-casting to avoid these “anti-combos.” 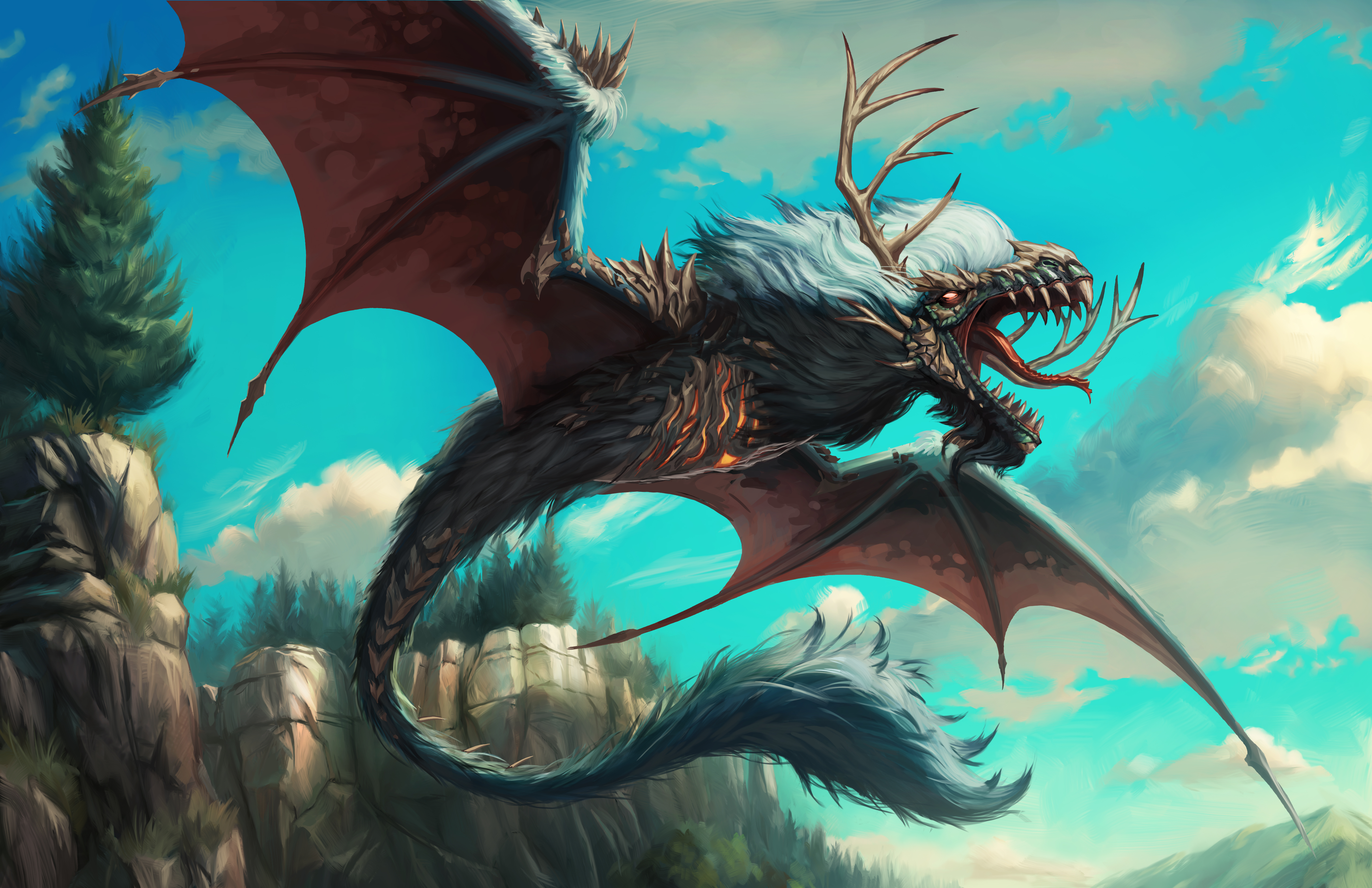 Lost in the woods, the dark, dark woods...

Those most attuned to nature, and the stillness peculiar to the endless forests of the Twilight Woodlands, have long sought out the wisdom of the dragon Makota. They rarely return, and when they do they are changed. There is a darkness hidden in their eyes, a cast of shadow across their brow. Yet there are always more who would treat with Makota, at whatever price.

Makota is a precision-focused Invoker with high-utility spells. Makota’s empowered attack is Invoke: Dread, which damages and freezes towers in a moderate target area. Invoke: Dread’s freeze duration is quite long, allowing Makota to reload their ammo and attack again before the freeze expires.

Makota’s main offensive spell is Ritual of Rebinding, which damages nearby towers and reloads all of Makota’s ammo. Casting Ritual of Rebinding at the right moment allows Makota to skip its typical reload period and quickly use Invoke: Dread multiple times.

Makota’s main defensive spell is Shield of Souls, which grants the dragon Invincibility and immunity to Mage tower supershots. When the shield expires, healing marks are applied to all nearby towers. If Makota destroys any of the marked towers, the dragon will restore some health.

Makota’s final spell is Adaptive Flak Resist, which swaps the dragon’s active resist and restores a small amount of rage with each cast. For best results, try to set Adaptive Flak Resist to whichever tower is not currently frozen by Invoke: Dread. Almost all of Makota’s damage comes from its breath attack and Invoke ability. When attacking an island, ensure that the first three shots all hit one tower, and Invoke: Dread’s AOE destroys that tower and freezes several others. Combining this attack pattern with Ritual of Rebinding should allow Makota to pick off towers one by one while repeatedly freezing any remaining threats. 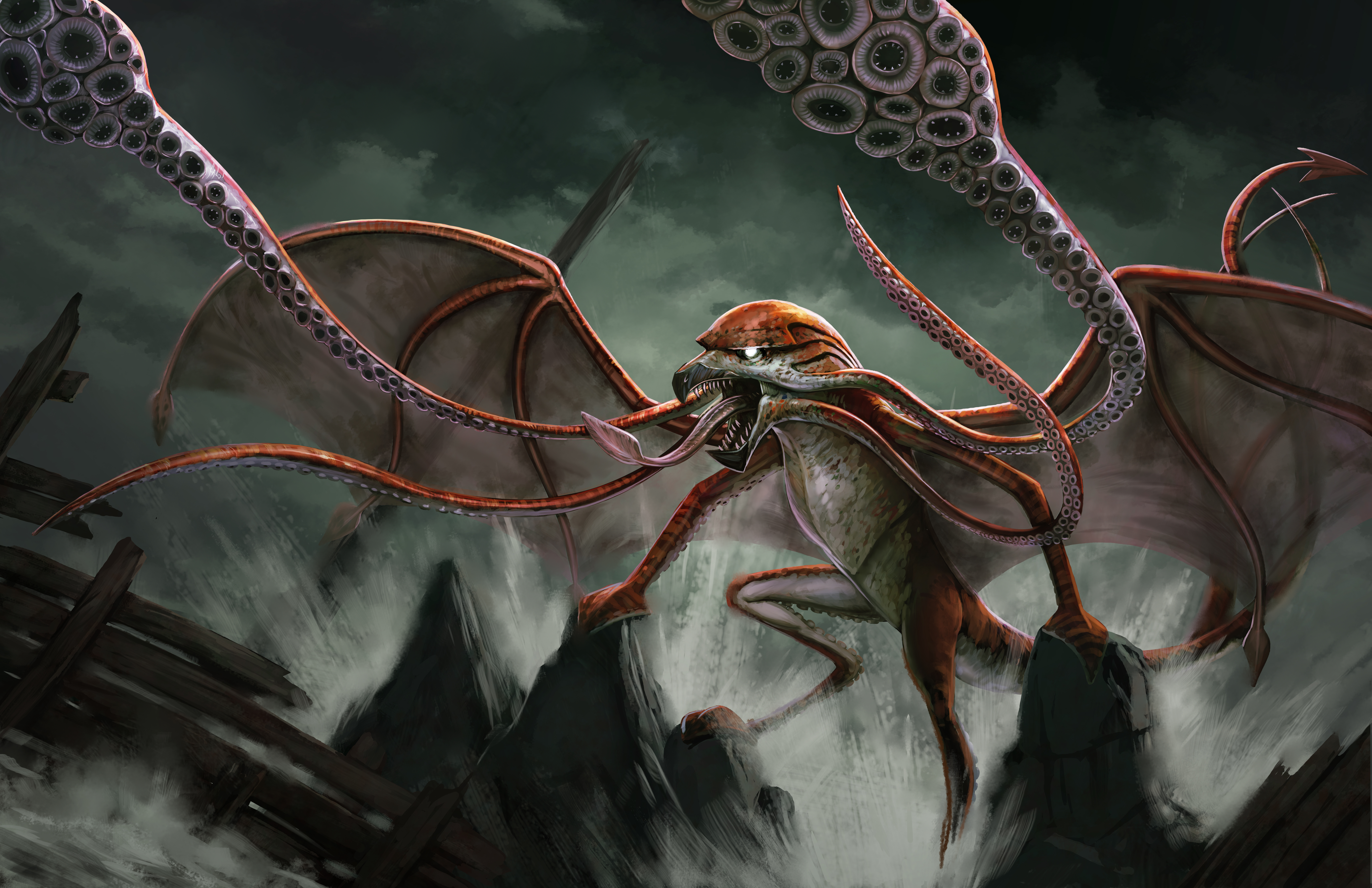 A fabled monster of sea and squall; the bane of every sailor in the world.

It was once thought that the destruction of a ship by the terrifying Cephoth could be avoided simply by having cats aboard, though no one remembers how that got started. It became the captain’s duty, at any port in Atlas, to ensure that there was a cat happily ensconced on their ship before the superstitious sailors would even consider casting off for the high seas. Then there was the Lamented Incident of the Sudene Feline Barge some thirty years ago, and now no one knows how to escape Cephoth’s wrath.

Cephoth is a high-damage sorcerer who excels at single-target destruction.

Cephoth’s main offensive spell is Summon the Lost, which calls forth a spectral ghost-ship to attack nearby towers. The ghost-ship will attack towers at random, and can absorb a large amount of damage before being destroyed. Cephoth can recast Summon the Lost if the ship is brought down, and the summon’s large health pool makes up a strong portion of Cephoth’s defense.

To help fuel these high-impact spells, Cephoth has Bloodfury, which instantly restores rage on cast, and causes Cephoth to heal whenever a tower is destroyed. Any towers destroyed by the ghost-ship will also heal Cephoth.

Cephoth’s final spell is Magic Barrier, which briefly blocks all incoming damage and mage tower supershots. Since Summon the Lost will be protecting Cephoth’s health pool, Magic Barrier should be saved for blocking Mage Tower supershots. If Cephoth ever runs out of rage and cannot summon its ghost-ship, the dragon will quickly fall in battle.

Conquer them all with the latest Verdant Legendary Dragons! Which of these powerful new beasts of war will join your roster? Head over to the official War Dragons Forums to discuss with the War Dragons community!
Get the free mobile game that everyone is playing.