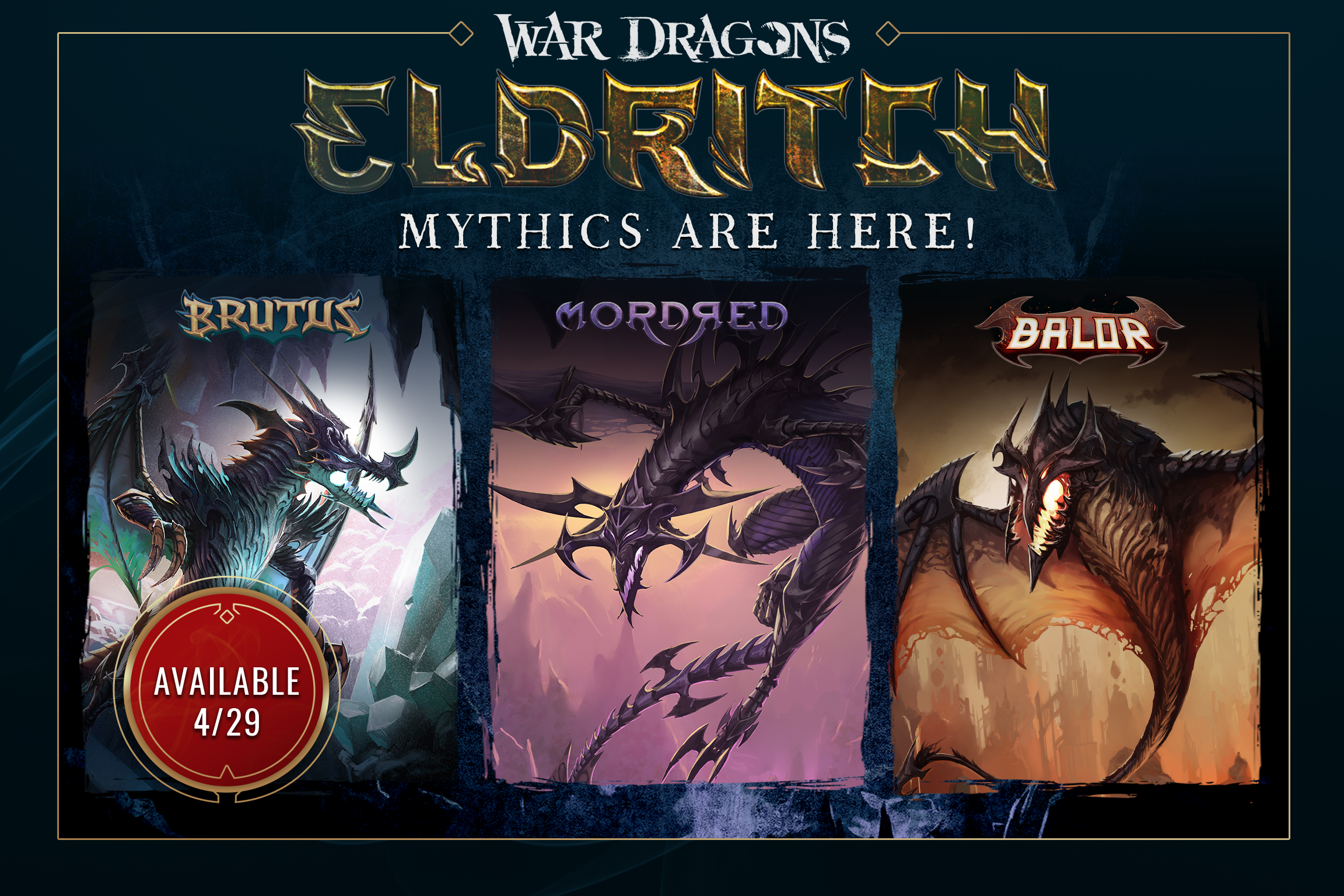 The Shadows bring shrieks before silence

The Eldritch Mythic Dragons arrive this week! With them comes neverending darkness and pain hitherto unknown to the realms of men. Some go screaming into eternity, comforted by the echoes of their own demise, others invite the terror into their hearts and are bound to these mythical horrors by grotesque tendrils of evil. Will you be devoured by Brutus, Mordred, and Balor, or will you use their power to blacken the skies and desecrate the earth?

These three dragons each require 2600 Egg Fragments to incubate. Each dragon will be able to be incubated at incubator level 16 and player level 468. The dragons can be experted at Dragon Level 50, Dragons Den level 120, and player level 494*. Players will be unable to expert their dragons until Den Level 120 releases at a later date.

Additionally, there will also be a new combination of Base-related and Dragon-related Research tasks that will become available in the Research Hall at the same time that Eldritch Mythic Dragons are available in-game. Here’s a look at what you can expect for new tasks: 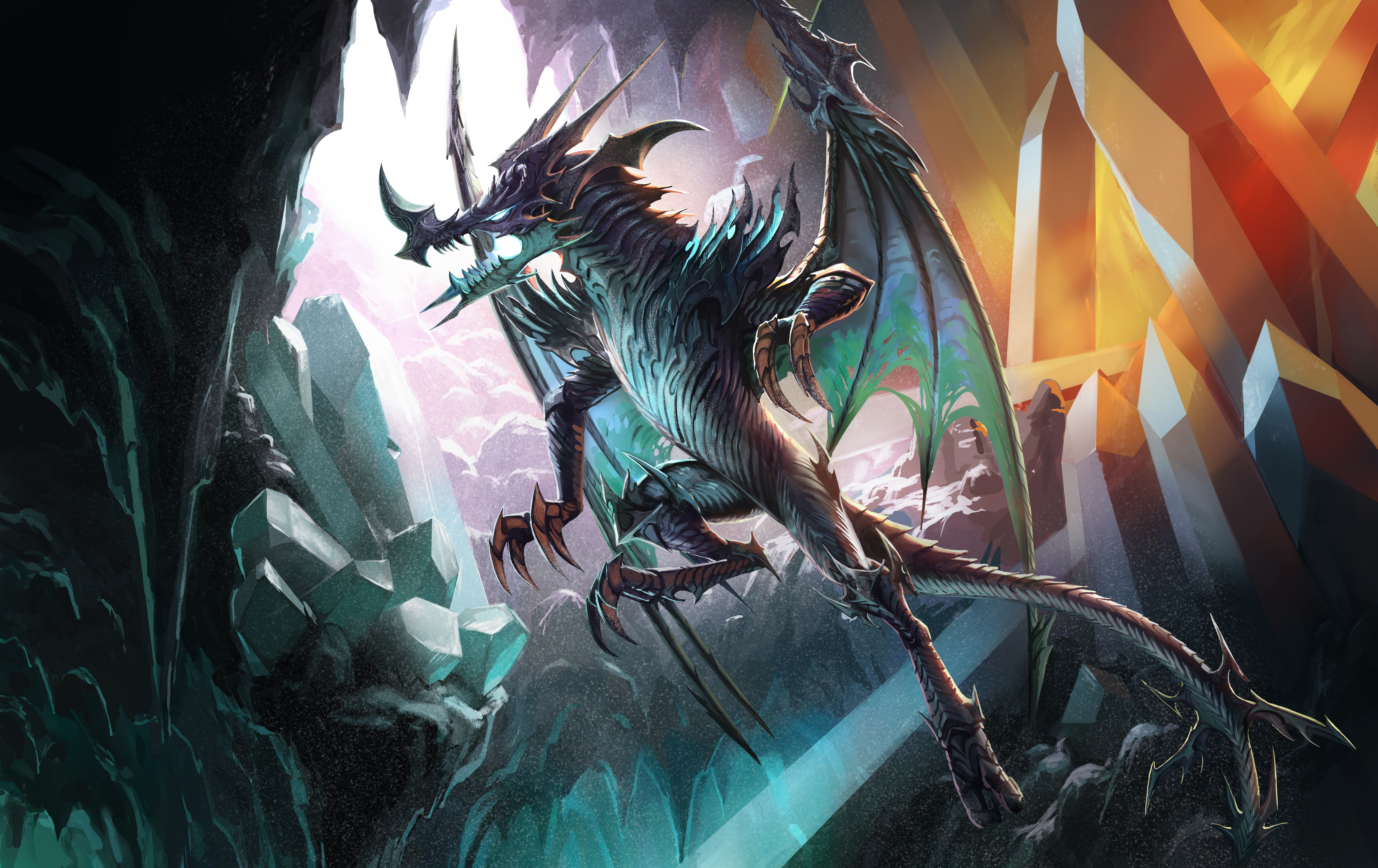 Base treachery, brutal and inevitable, is all this dragon knows.

The origins of dragons, collectively or individually, is something wreathed in mystery and speculation. The refined scholars of natural sciences postulate that dragons are like any other species found in Atlas, who breed and flourish in the right environment. Those who are more interested in magic meanwhile point to the many one-of-a-kind dragons who stalk the skies, smoking with power and truly ancient.

There is none other like Brutus. A dragon that cleaves close to only Mordred and Balor, it is known for inevitable betrayal. Sages from the Burning Sands maintain that Brutus was created when the first act of true treachery sent shockwaves of magic through the world, and in any case, many a proud Dragon Lord has learned to their sorrow that Brutus’ help comes with a heavy price. Yet there are always more, willing to have the Wind of Treachery on their side if only for a little while.

Brutus is a warrior who relies on precise spell placement to dismantle enemy defenses, then brutally tear them down. A well-aimed Skewer allows Brutus to damage and stun multiple targets in an AOE. Brutus should use Skewer to target Mage Towers, ensuring the dragon’s rage resources are safe while they Brutalize the rest of the base.

Brutalize is Brutus’ second spell, which vastly increases their breath damage and rage regeneration but slowly deals damage to Brutus over time.

Brutus’ main defensive ability is False Hope, which makes Brutus briefly immune to all tower attacks and Super Shots, then marks all nearby towers. If Brutus or one of their allies destroys a marked tower, they will restore some health. False Hope can be used in combination with Brutalize to negate the spell’s self-inflicted damage.

Brutus’ final ability is Treacherous Roar, which debuffs all nearby towers to deal reduced damage for the rest of the battle. Brutus can utilize Treacherous Roar to ensure that they nor their allies never take more damage than they can restore from False Hope. 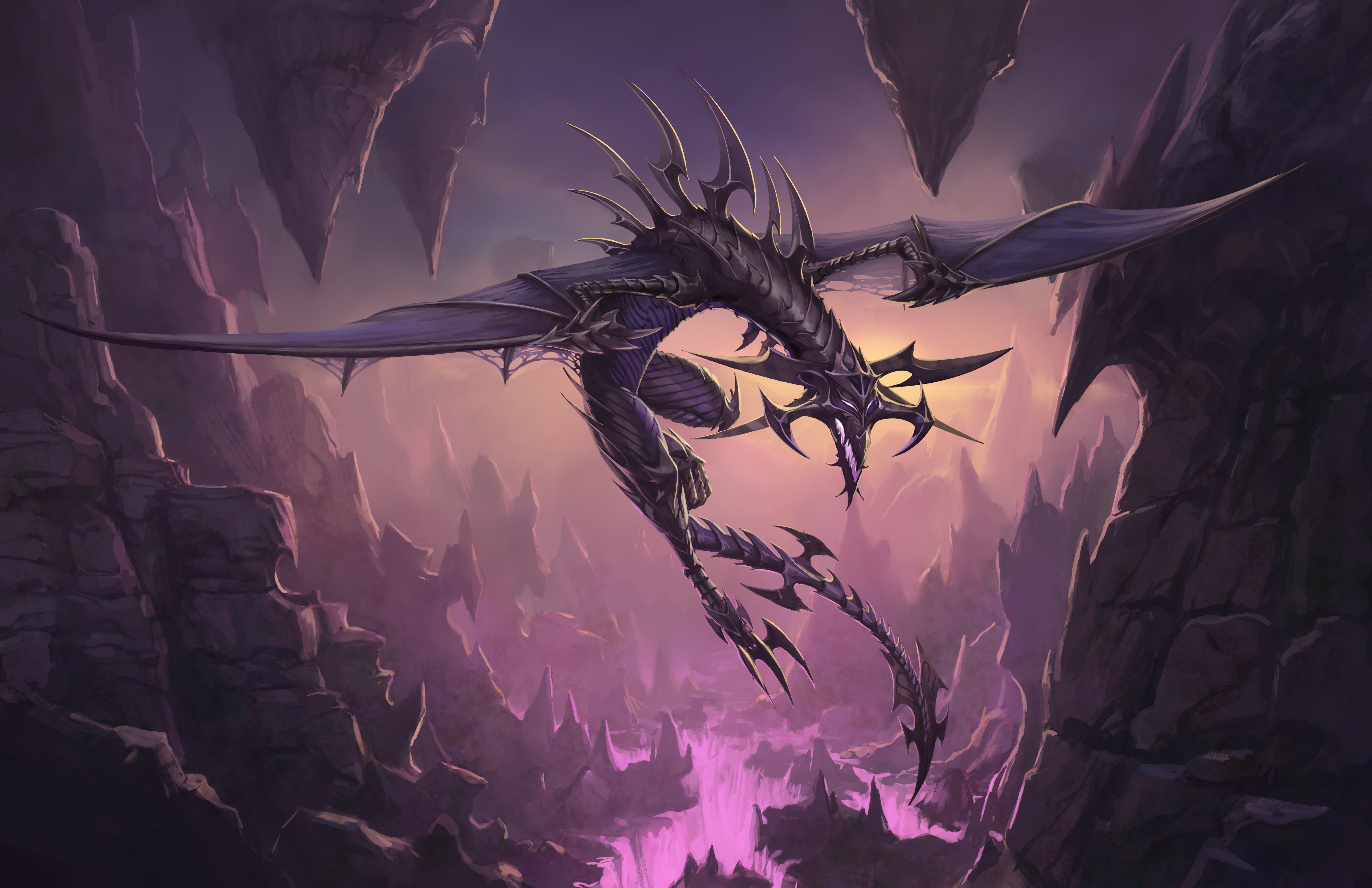 The raised fist, the unsheathed blade: Mordred is violence incarnate

The lands of men remember Mordred mostly keenly for the Battle of Argulon’s Vale. Some retellings and histories of it say that Modred drifted into the fierce siege of its own accord, and others say the Dragon Lord Kamoiro made a pact with the bladed horror. The devastation wrought by Mordred exists in all versions of that battle, with details ranging from rains of severed parts from the manned walls of the central keep to what happened to the unnamed dragons who flew too close to Mordred’s blades. In the eastern lands of Atlas, it is still considered a most terrible threat for a Dragon Lord to mention that battle to a rival, and several long-running wars have started from such a threat. Mordred itself had not been seen for many decades until the troubles during Lotusbloom in the Glowing Cradle seemed to rouse the Blade of Violence itself.

Mordred is a mythic hunter that defeats their enemies with a flurry of blades. Mordred’s primary offensive spell is A Thousand Cuts, which damages nearby buildings and greatly reduces the dragon’s ammo cost for a short time. A Thousand Cuts gives Mordred nearly infinite ammo, and the dragon can destroy multiple high threat targets at the same time.

Mordred’s passive spell is Blade Wall, which creates a barrier in front of Mordred that absorbs half of all incoming damage. The wall does not attack, but can be destroyed if it takes too much damage. Blade Wall gives Mordred extra defensive power when attacking the first few islands of a base, but the dragon’s survivability will dwindle as the battle goes on.

Mordred’s final defensive ability is Coward’s Blade, which heals the dragon, refills its rage, and grants it brief invincibility. Coward’s Blade can be used to supplement Lacerating Vortex with further defenses, and to prevent Blade Wall from taking too much damage.

Mordred’s biggest weakness is its long ability cooldowns. Be careful not to cast too many of Mordred’s spells at the same time, as this can leave them particularly vulnerable. 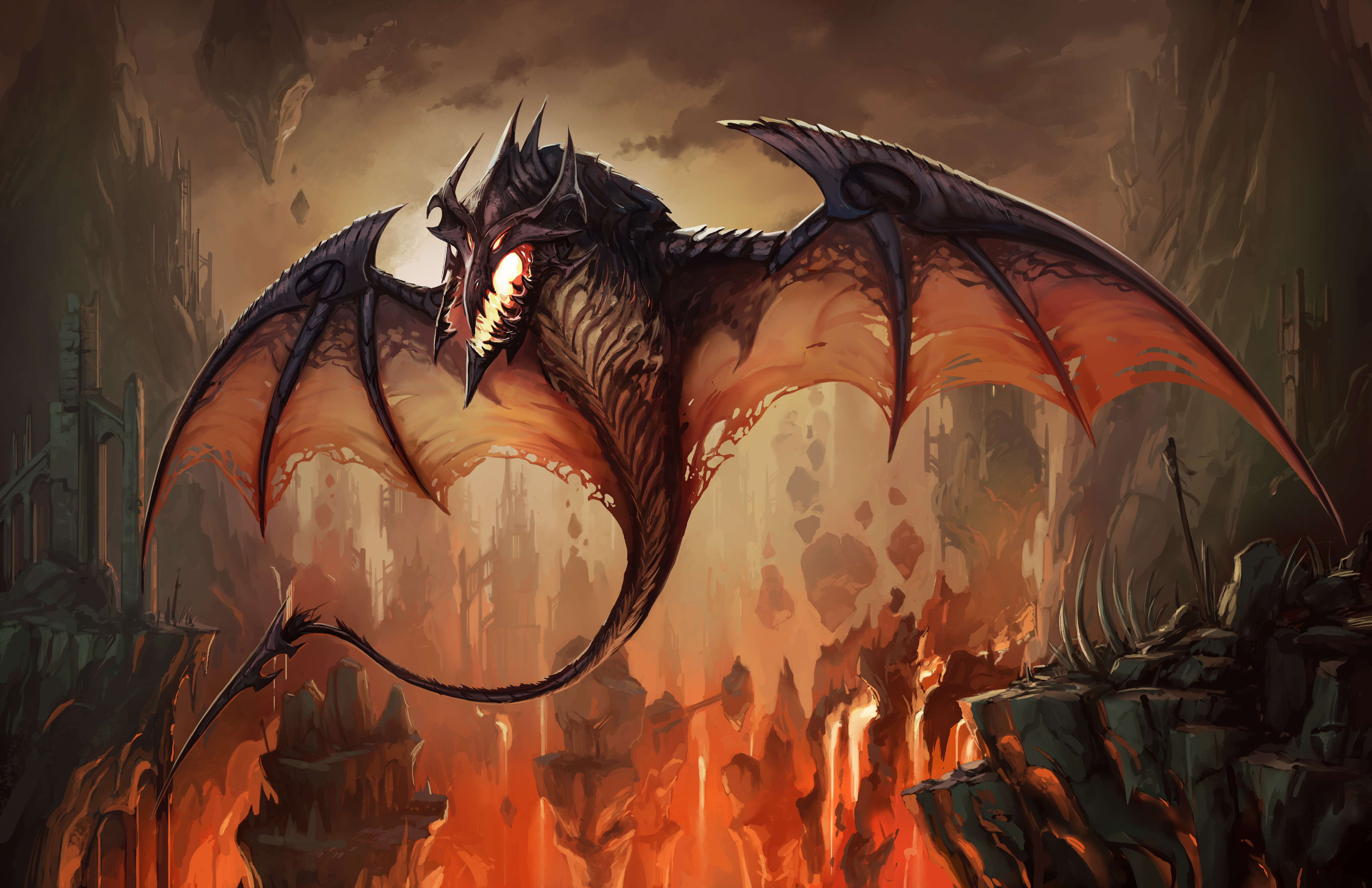 Dwells in a subterranean part of the Void: a creature of unending, smoldering anger

Little is known of the Spark of Hatred. Mordred and Brutus do not snap at Balor unlike other dragons who draw too close, so the three of them have some sort of connection. Balor is almost never seen alone and instead tends to follow behind Mordred or Brutus, bringing a fiery end to whatever their cold sharpness misses. Dragon Lords who have communicated with Balor have all gone mad with hate, and so the few times it has fought on the side of humans has been part of a deal with all three dragons. No kingdom in recorded history has successfully stood against the combined darkness of Balor, Mordred, and Brutus.

Balor is an Invoker that relies on careful ability management to power up and overwhelm enemy defenses.

Balor’s empowered ability is Invoke: Smolder, which applies a stacking boost to the dragon’s breath damage. Balor’s breath attack is its only consistent source of damage, so triggering Invoke: Smolder as often as possible is key to the dragon’s success. Try to cycle the Balor’s ammo reserve when flying between islands, and consider leaving one tower alive to extend the battle’s duration.

Balor’s primary offensive ability is Unrelenting, which damages nearby towers and grants the dragon brief invincibility. Additionally, the spell instantly reloads Balor’s invoker ammo. Balor can use Unrelenting to quickly double-cast Invoke: Smolder or to reload mid-battle and take down enemy towers.

Balor’s main defensive spell is Bellow of Anger, which incinerates any mid-air projectiles and briefly stuns nearby towers. Bellow of Anger allows Balor to more safely reload its ammo and protect itself from mage tower supershots. In order to keep his fiery onslaught going, Balor requires lots of rage.

Heat Reaper allows Balor to refill their rage and heal off of destroyed buildings. With careful planning and skilled use of his abilities, Balor can massively ramp in power during long battles and become an unstoppable force.

Eldritch Mythic Dragons - will you invite incalculable pain and never-ending darkness into the ranks of your roster? Head over to the official War Dragons Forums to discuss with the War Dragons community!