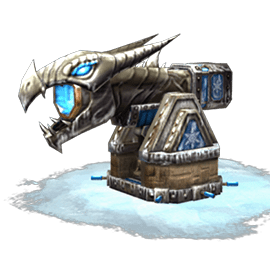 The Ice Flak Cannon is the third tower in the Flak tower series that harnesses the power of elemental energy. Here is a FAQ for this new and powerful tower.

We are releasing the Ice Flak Tower today (January 30th) in time for the Fortification event that begins Wednesday. The Ice Flak Tower unlocks at level 55. You can find it in your Build Menu when constructing a new tower.

Supershot will not prevent or disable passives.

As it is an elemental tower, it has the same interactions similar to the Dark Flak and Fire Flak cannons.

Yes! The engineers inside the Builder Hut are hard at work building more defensive towers to protect your island.

​You can only build one Ice Flak Cannon per island. You can, however, build other Flak type towers on the same island.

Ready to discuss the Ice Flak Tower even further? Head on over to our forums, Tweet us with @WarDragonsGame, or find us on Facebook!